Follow my blog with Bloglovin
This was the first week of homeschooling for our family. I was reporting daily on the progress being made and feeling more and more confident each day. I was excited that I was going to be able to report that we made it through the week without anyone getting hurt…

But Someone Did Get Hurt! Someone Got Really Hurt!

The day was going so well. We had gotten many of the projects on our list crossed off. Everyone was in a good mood and everyone was interested in learning.

Since life was going so smoothly, we decided to go on an outing and run some errands. We went to the dollar store and got some great craft materials and some materials we plan to use for sensory play. Then we went to a Big Box store to get a birthday gift for a cousin.

By the time we pulled up, everyone (Especially Super B) was starting to get cranky. This is where the story took a turn. I asked the boys to unload the car while I fed Super B. I was sitting on the couch when LIFE STOPPED!

Legoman let out a cry I’ve never heard before. He came running in the living room while I was still nursing B. Now anytime one of the children get hurt, I get this mental image of blood gushing from their face or something broken that I won’t know how to fix. I instantly go into lockdown and am afraid to look at the damage.

Legoman runs into the house, screaming…

Since I was nursing B, all I could do was help him breathe calmly and ask him to lay on my lap. I actually put B down on the floor for a minute mid-nurse, before I realized I couldn’t really expect B to understand why her milk supply had just ended.

This gave me some think time, as I sat on the couch with a nursing baby and a hysterical 8 year old in my lap. I was scared to look, I was scared to find out what happened. But I did. I looked. I couldn’t see what had happened at this point.

Appearantly, Bones was attempting to close the back gate to the SUV and had climbed into the car to pull down the door, when Legoman came running up behind the door and said “I can help”. At that moment, Bones couldn’t hold the door anymore and then WAAAPPP! Legoman was thrown back onto the ground by the trunk door.

I was planning on allowing Legoman to just take it easy and watch movies the rest of the day, until he said the scariest words…

Mom, You keep going black and white. You have black holes everywhere.

Okay, enough said. We are going to the ER. Did I over-react? Maybe. Did I need to go to the ER? Maybe Not. But I wanted to make sure nothing was broken or worse, considering everything.

Now, you know how I tell you what a wonderful husband, father and step-father Papa Bear is? Well, he was nothing short of amazing again this day.

I’m going to meet you there! You have three children and shouldn’t have to do this alone. I will be there, if for nothing else, but to hold Super B and be support for you.

Luckily at the hospital, there was no wait and everyone was super nice. By the time we got back to see the doctor, Legoman was feeling much better and poor Bones was not feeling as guilty for the blow.

We were informed that since he wasn’t unconcious for more than 5 minutes, and there didn’t appear to be anything wrong with his cognitive abilities, that they would not do a scan of his head. They don’t like to scan children in an attempt to limit exposure to radiation.

His face absorbed most of the blow.

It was not until later that night, once the adrenaline had died down that I started to see the big picture. After the night ended with a dance party;  once I had the boys and B in bed, it started to sink in what happened. I started to realize the magnitude of what COULD HAVE happened. I realized how blessed we were for WHAT DIDN’T happen. 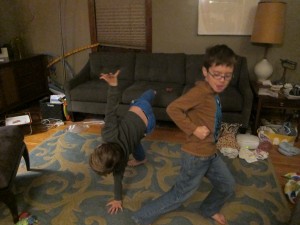 I snuck into the room of each child and gave them an extra hug and kiss while they were sleeping.

When they woke the next morning I was sure to tell them how much they were loved.

You never expect these moment. You never know the outcome. All you can do is make sure you let them know how much they are loved as often as you can and