Welcome to 6th edition of 12 Months of Sensory Dough where 12 KBN Bloggers will bring you their special spin on a popular sensory dough. This month’s feature… Ice Cream Dough! Our hope is to provide a resource where you can find all things Sensory Dough in one place. We feel so excited about this being a place for you to find and share great ideas, that we have opened our link-ups for an entire year. 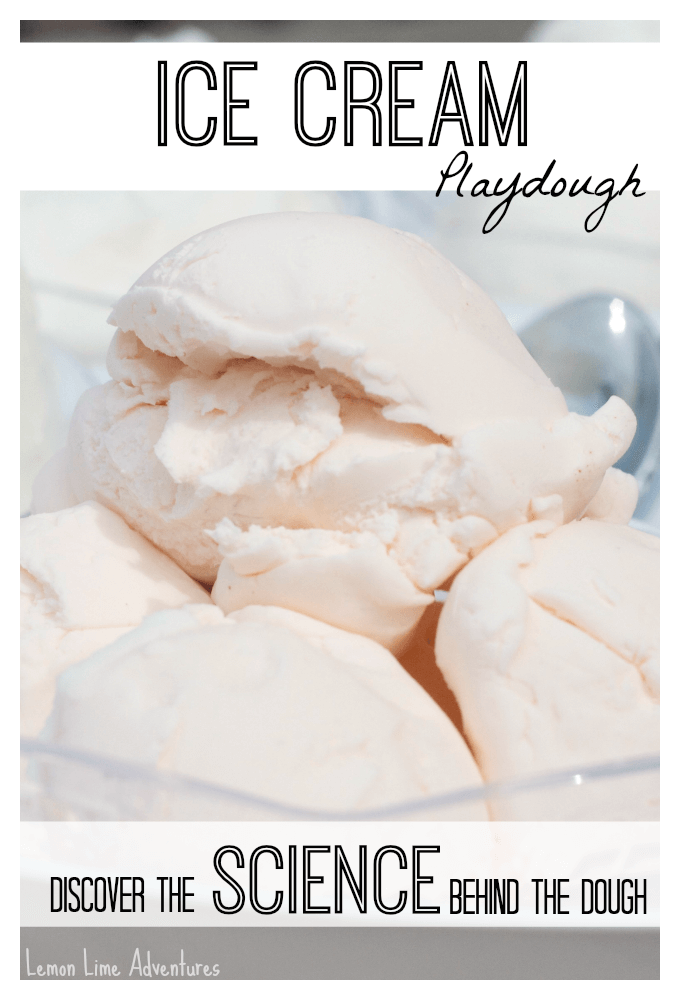 {THIS POST MAY CONTAIN AFFILIATE LINKS TO MATERIALS I RECOMMEND. ANYTHING YOU PURCHASE THROUGH THESE LINKS HELPS SUPPORT LEMON LIME ADVENTURES. THANK YOU IN ADVANCE FOR CHOOSING TO SUPPORT US.}

WHAT IS ICE CREAM DOUGH?

As you will see the ingredients vary, but the recipes are simple. 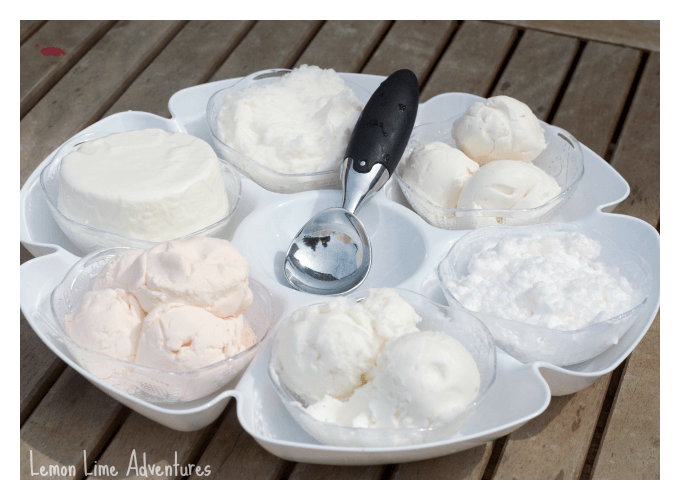 As you will read from my co-hosts, there are variations and differing opinions as to what Ice Cream Dough is and how you can play with it!

Should it be made with Water? Cream? Conditioner?

Should it be cold? Should it melt? 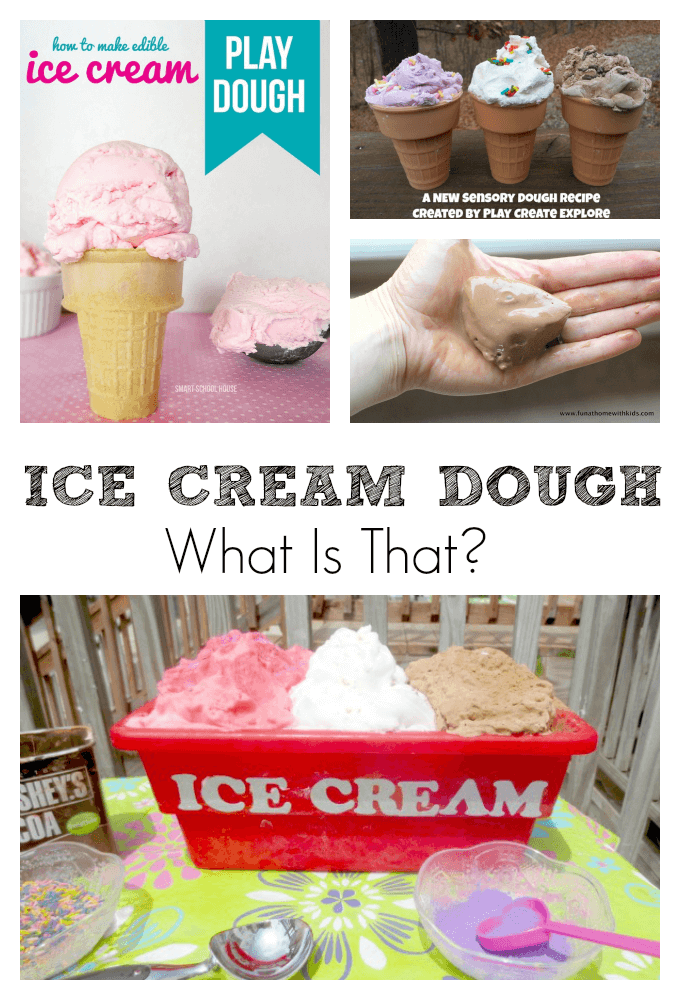 According to my good friends at Growing a Jeweled Rose,  Play Create Explore, Fun at Home with Kids, and Smart School House you might describe Ice Cream Dough as:

If you click through to their recipes you will see that they both differ slightly and even they don’t all agree on the liquid ingredients. So we set out to figure out the best Ice Cream Dough Recipe and learn the science behind it!

WHAT EXPERIMENT DID WE DO WITH ICE CREAM DOUGH?

Since Ice Cream Dough is supposed to look, feel and act like ice cream, we thought the perfect experiment would be to test the properties of the most popular recipes and and find out how close they resemble real ice cream. Before we began, we discussed what we already knew about ice cream.

The boys described it as cold, scoopable, and wet. We discussed whether you would describe ice cream as a liquid or solid. We also discussed that ice cream holds a shape, can’t be poured, and melts in you hand. 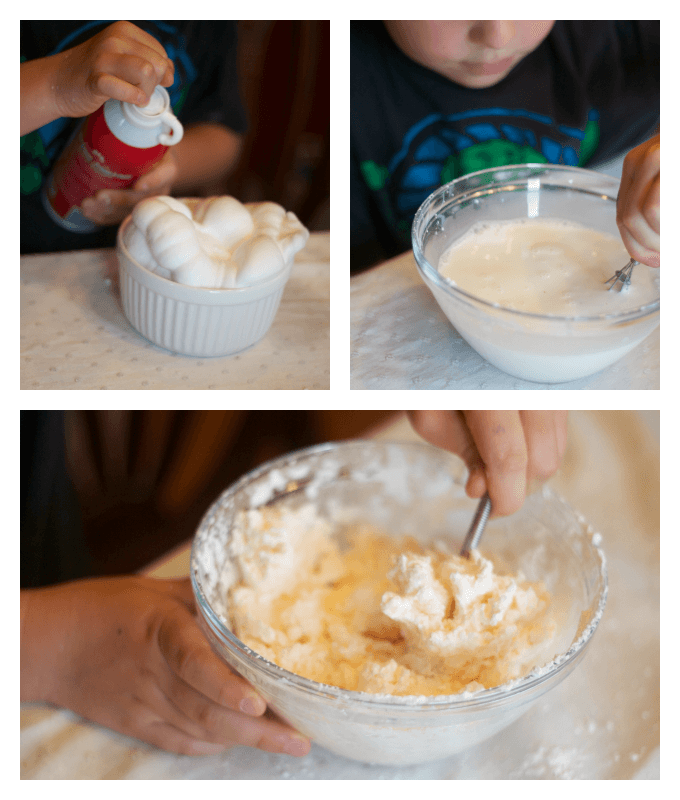 The first thing we had to do was get to work making all our recipes. We made one with conditioner, one with shaving cream, one with icing, one with cornstarch and even one with coconut oil {our own special recipe}.

Next, it was time to test each recipe to determine if it was a liquid, solid, or in between. 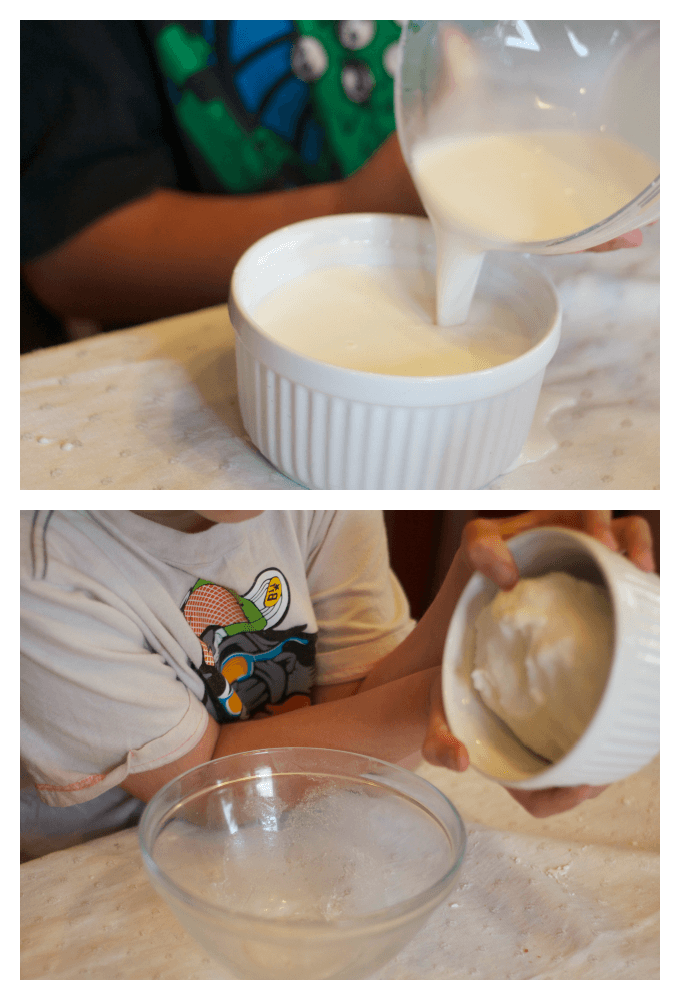 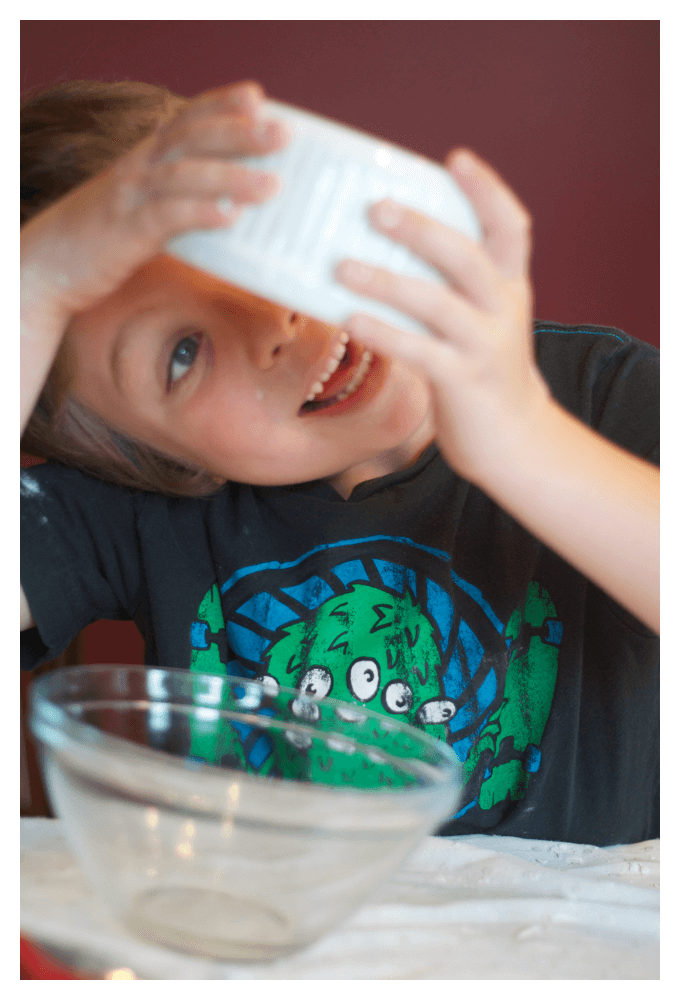 But now, we needed to test if how it felt… 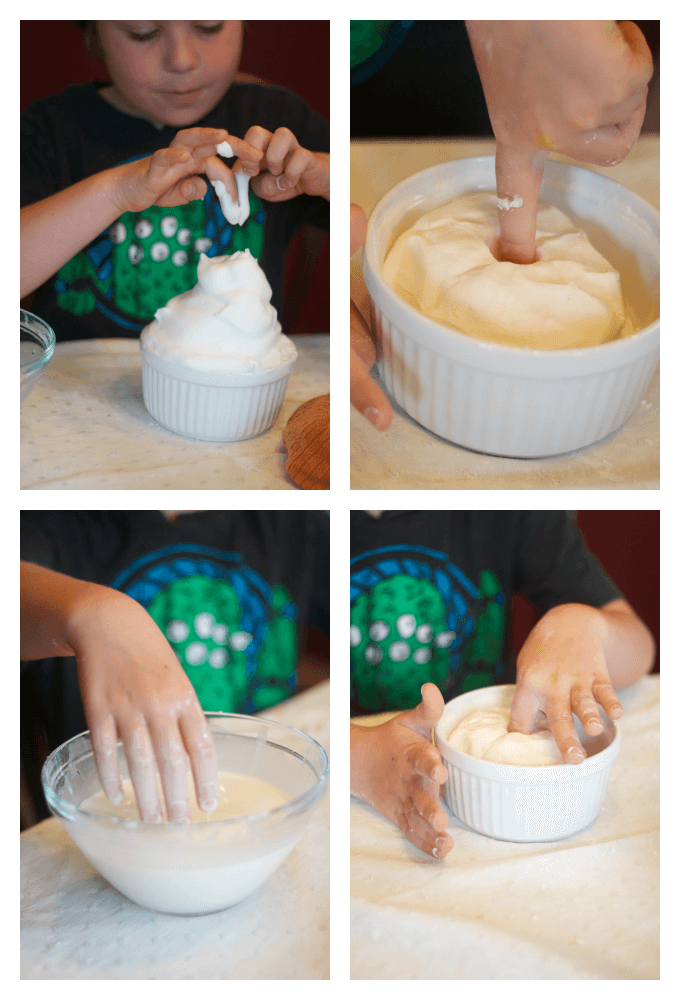 Some of the recipes call for the doughs to be frozen, and some are complete after you mix them. You will want to make sure you click through to the recipes to see which ones need to be frozen.

As for us, we froze ALL of them, just to see what would happen. We are here to tell you… not good. What the boys learned was that an important part of ice cream is AIR! If you have a recipe that is missing air, you will get a hard block that DOES NOT REACT like ice cream. 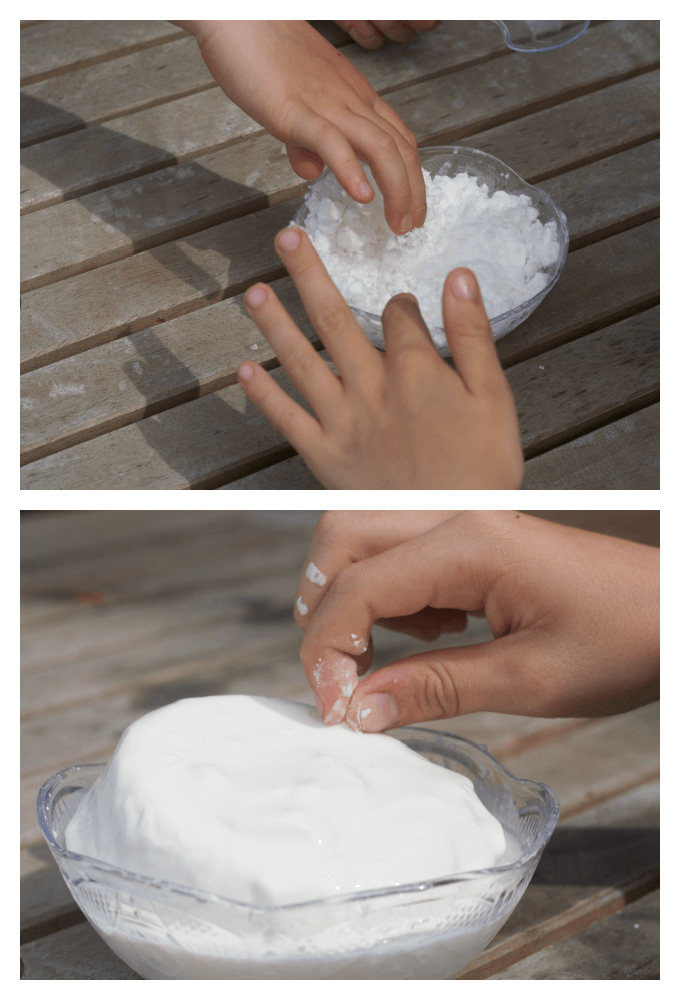 Now for the fun part… To compare the completed ice cream doughs!

WERE WE SUCCESSFUL AT MAKING ICE CREAM DOUGH? 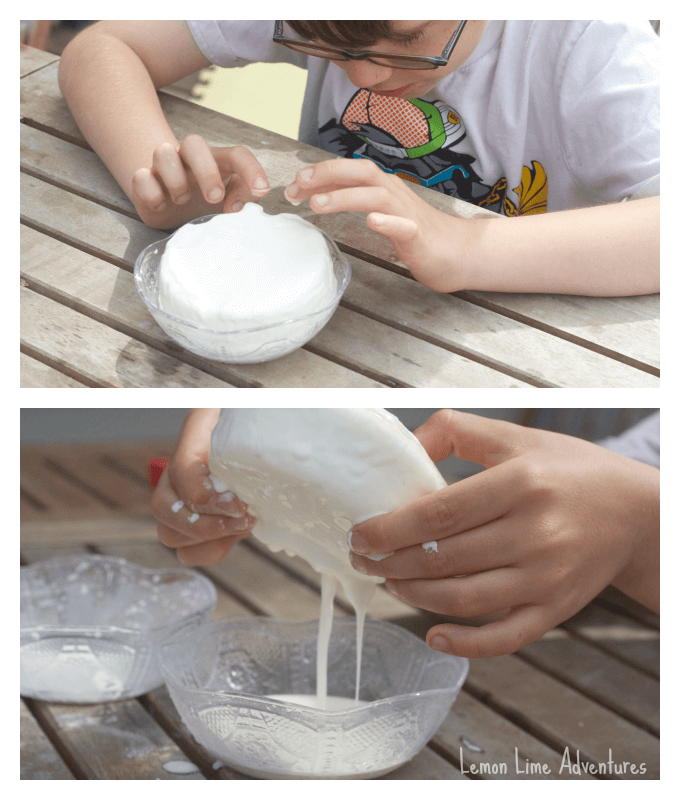 The recipe from Fun at Home with Kids was so fun! It was like a frozen oobleck! Bones really liked how it was cold and how the recipe actually melted. We didn’t make the recipe with all the ingredients but if it we had, it would smell just like ice cream and melt like an ice cream Popsicle. I think I would love to try this recipe as a Popsicle next time, since it was not a scoopable sensory dough.

The Science Behind the Dough: Oobleck is known as a non-newtonian fluid, simply meaning it takes on both forms dependent on the pressure surrounding it. When you freeze the oobleck, you get the “ice cream” look and feel as the water freezes. As it is melting, your substance turns into a closer resemblance to traditional oobleck, but because it was in the frozen state, as it melts it will reform quickly. 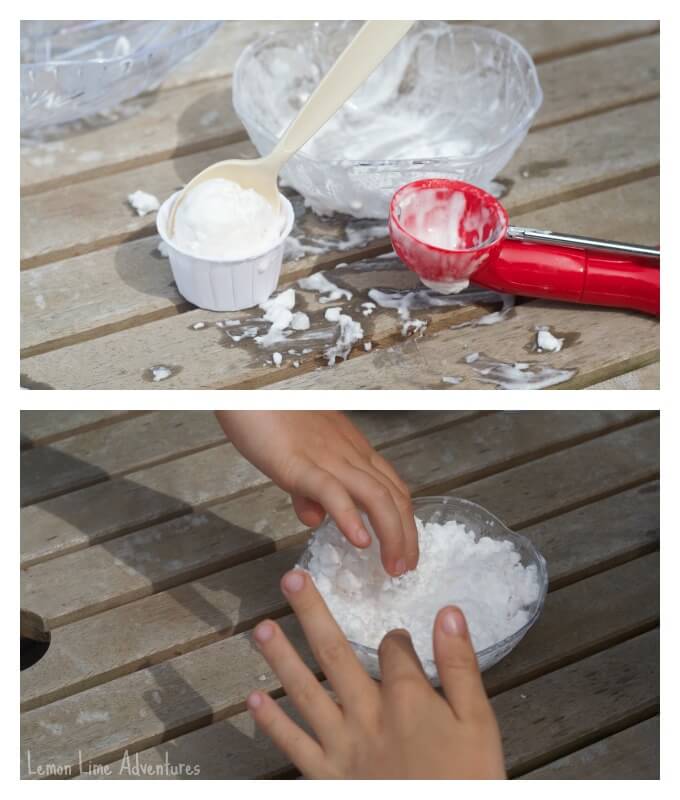 Next, we tested the recipe from Growing a Jeweled Rose! It was cold and felt like a delicate shaved ice. It melted in our hands and could be easily scooped. Bones definitely liked this one more than Legoman did, since it was just too cold for Legoman. This one also had a smell that was not like ice cream. This made it very hard for him to play with it due to his sensory processing disorder.

The Science Behind the Dough: The science of shaving cream is pretty cool. It is one substance that is considered to be all three states {gas, liquid and solid}. Due to it being 76% water, it has the ability to freeze while not creating one solid mass. The other ingredients allow it to react in a way that causes it to expand before it is frozen. Freezing it stops those reactions, allowing you to scoop and play! This Dough is super fast, and super easy, but beware… you want to make lots of it, since it melts at the touch and you are left with its liquid form. Once again providing a great example of a non-newtonian fluid. 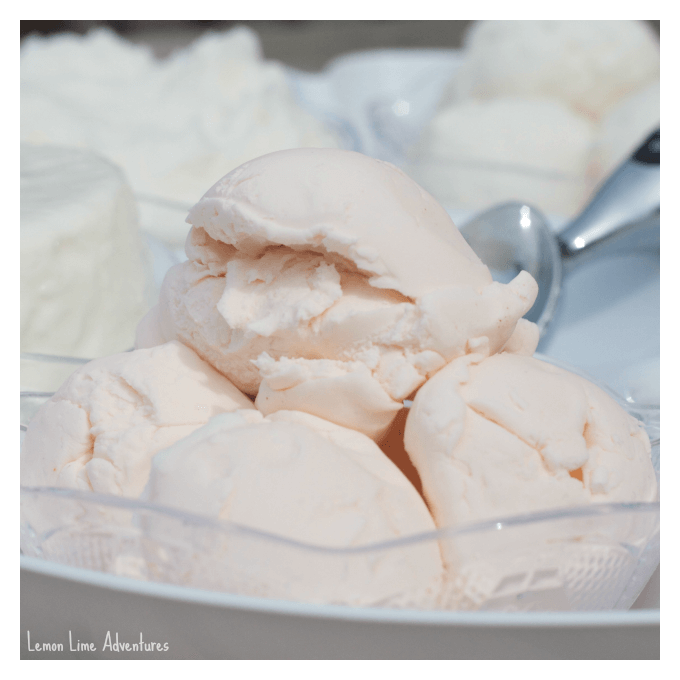 I have to tell you, the recipe from Play Create Explore is delightful! The boys loved how well it scooped and held its form. The mixture of the two ingredients created a moldable, soft dough that was incredibly soft. Legoman tends to put EVERYTHING in his mouth, do this was not the best recipe for him to play with as “Ice Cream”. However, it was one of his favorites for tactile input.

The Science Behind the Dough: By now, you might be noticing a trend. Each recipe has a liquid and a solid mixed together to change the state of the dough. This recipe is yet another example. If you use more of the liquid and less of the solid, you will find that you will make another “oobleck” form. The added oils in the conditioner cause this dough to act like “real ice cream” due to the similar viscosity in the two substances. Because this dough does not contain any water, it does not need to be frozen and will not melt with play. You will notice that the dough will soften with  play and become more pliable as your hands heat the dough. 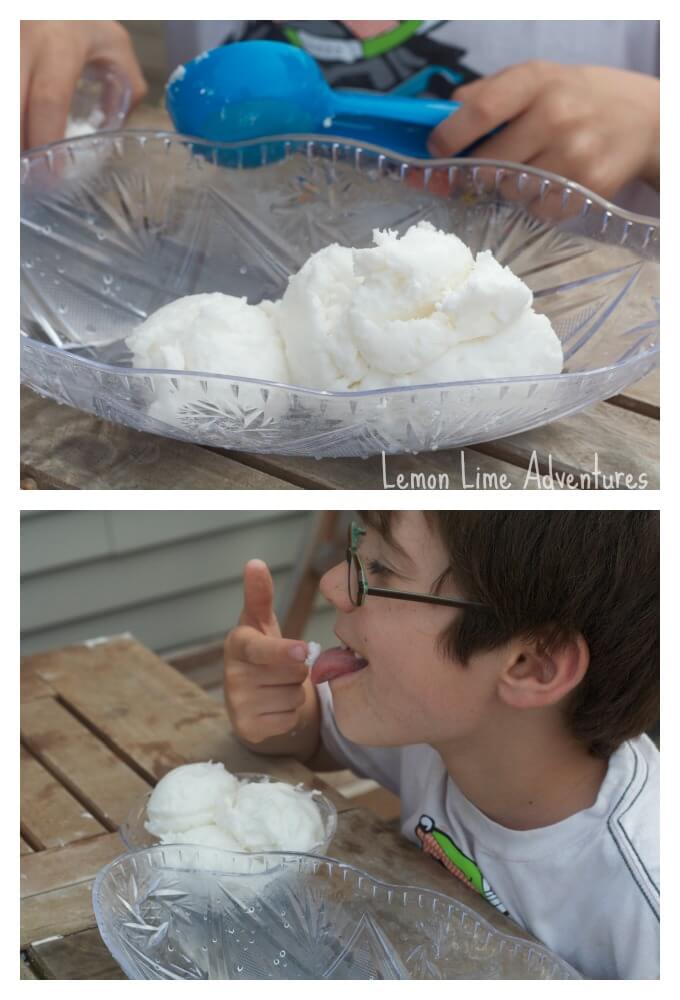 Finally, we made Smart School House‘s recipe and Legoman was in Heaven. He could finally taste the recipe since having something called “Ice Cream Dough” and not being able to taste it was torturous to him. Aside from not being cold, this dough looked, smelled, and acted just like real ice cream.

The Science Behind the Dough: Similar to the last dough, this recipe uses a thick liquid mixed with a powdery solid. The solid acts as a thickener and creates a stronger bond for the components of the dough. The mixture of the two ingredients make the dough now malleable and soft. Just like the last dough this dough can be played with for a long period of time without changing its consistency.

Wait! We weren’t done… We were so excited about what we had learned, we tried our own dough and our own recipe! Making all of the other recipes, testing what happens when we freeze them, and observing what happens to them when you add heat and pressure made us curious if we could make a dough using other ingredients we had in our house. You won’t believe what we came up with! 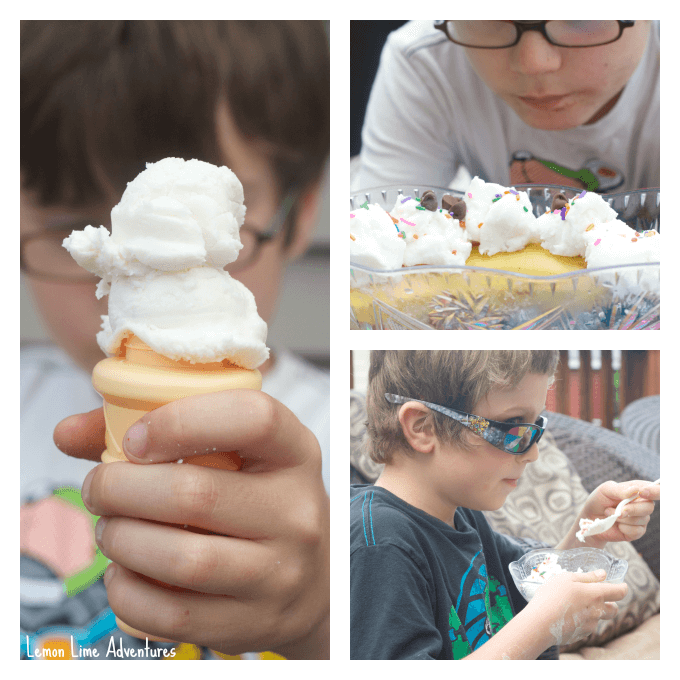 We can’t wait to share our new recipe. We think you will go crazy for the ingredient we used! For now we want you to find a recipe and a play idea you love!

NOW FOR THE FUN PART…

Would you call this recipe a success or a fail? Do you have a favorite Ice Cream Dough recipe or activity that you consider a success or do you have a fail you want to share? We want to see! Link up your posts or post pictures to Facebook, Instagram, Twitter orGoogle+. Tag your pictures with#ilovesensorydough.

Be sure to check out each blogger, as we will each provide a different take on the dough, some of us with have the BEST recipe ever, while others (probably me) will show you our attempts (both failed and successful)

PLEASE READ THE FOLLOWING GUIDELINES BEFORE LINKING UP.

The linky will remain open all year. On the 12th of each month, all co-hosts will post a new dough with their spin, highlighting at least one post from the month before and pin each post to the 12 Months of Sensory Dough Board.

HAVE YOU MISSED ALL THE OTHER DOUGHS? 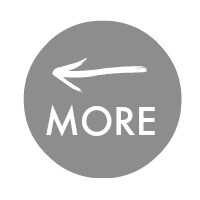 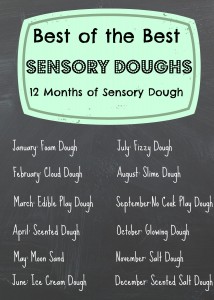 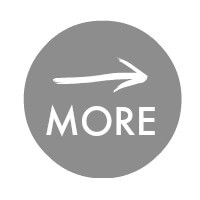 GET READY FOR NEXT MONTH: FIZZY DOUGH 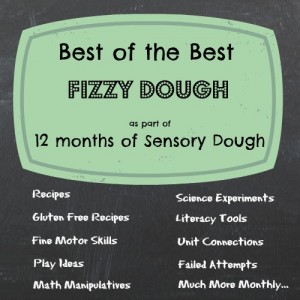 4 thoughts on “Ice Cream Dough | The Science Behind The Dough”