I’ll be the first to admit that my four-year-old is not the poster child for a good sleeper. I’m not sure if it was the daily games of “you sleep, I sleep” she used to do with her papa in the middle of the day when she was a newborn, or if it’s the fact that she’s the baby of the family, but there is one thing I know for sure.

My daughter is not the world’s best sleeper.

I know we’re supposed to embrace the moments of her wanting to climb in bed with me and cuddle up close and have her mama right beside her, but some days I just want to sleep with more than one inch of bed.

As she inches closer to five, I keep nudging her softly towards sleeping in her own bed, being a little bit more independent, and being comfortable going to sleep in her own room at night. We’ve set up the perfect nighttime routine. Yet still, she was struggling to stay in her room at night.

I’m excited to partner with Energizer to share this simple science activity that’s actually kept my daughter in her room more nights than she’s been in my bed.

You see, back to school is not a very good time of year if your kids can’t get a good night’s rest (or if you can’t). So today I can’t wait to share this brilliant science experiment for kids that are afraid of the dark!!! 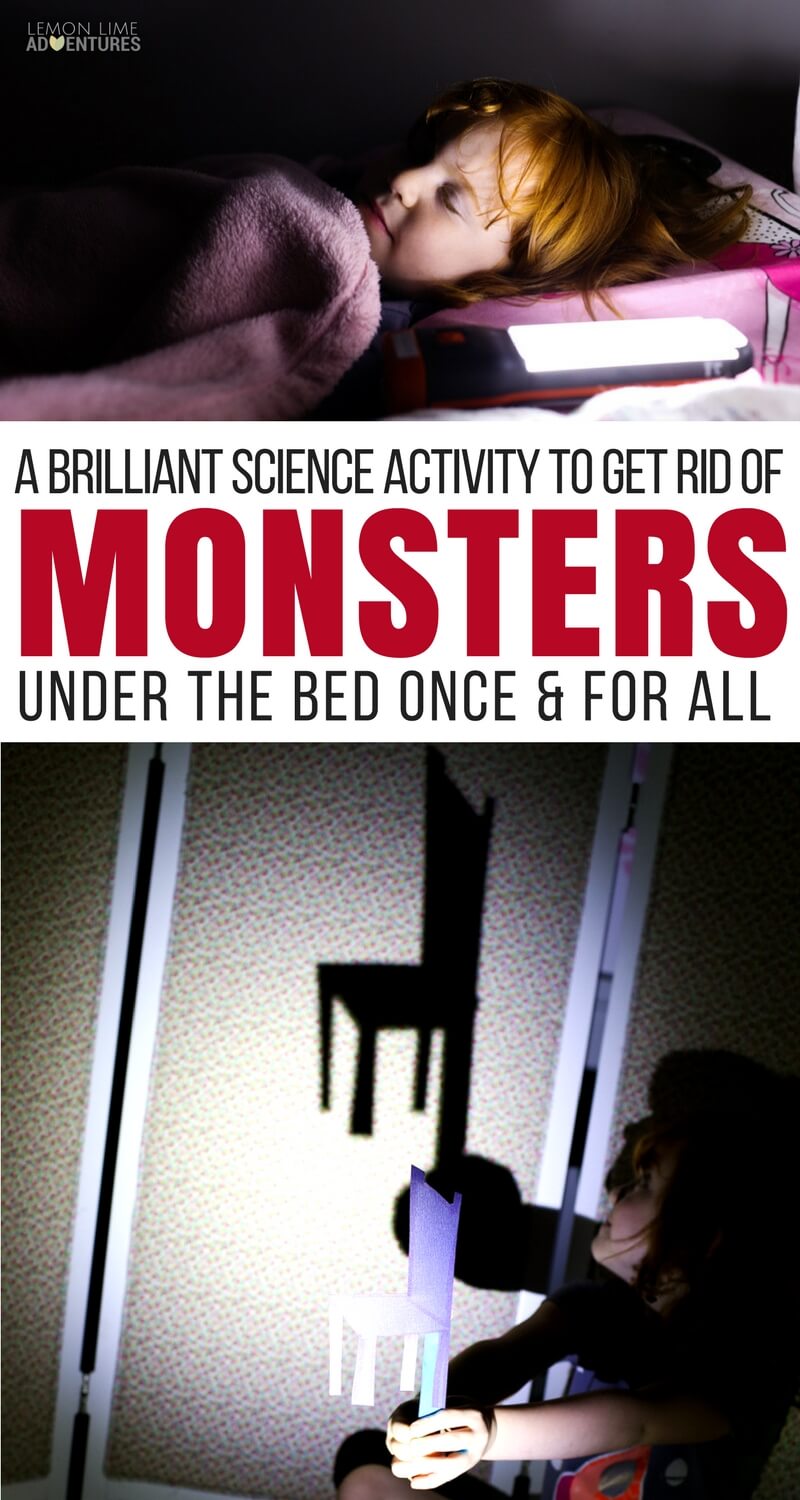 As many of you know, I am a scientist at heart.

I love exploring the reasons why kids do what they do and why the world does what it does. I love figuring out how things work and how we can interact with the world around us.

So, when my daughter was refusing to stay in bed at night, I knew there had to be an underlying reason. And wouldn’t you know, mama’s intuition wasn’t wrong.

My daughter was suffering from something that a lot of children suffer from but they don’t quite know how to put it into words or how to fix it.

My daughter was scared of monsters.

Now, we had had all the talks we could about whether monsters were real or make believe. We had read books, funny ones and real ones. But, you see, that didn’t change the fact that she saw something in the night, that made all logic go out the window. Do you know what she was seeing?

She was seeing shadows.

It’s so easy for us adults to just tell a kid, “Don’t worry, honey. It’s just a shadow. There’s nothing to be afraid of.”

But in a four-year-old’s brain, they know they can see it. So, how in the world is it not real?

That’s where science comes in and my new flashlights from Energizer. 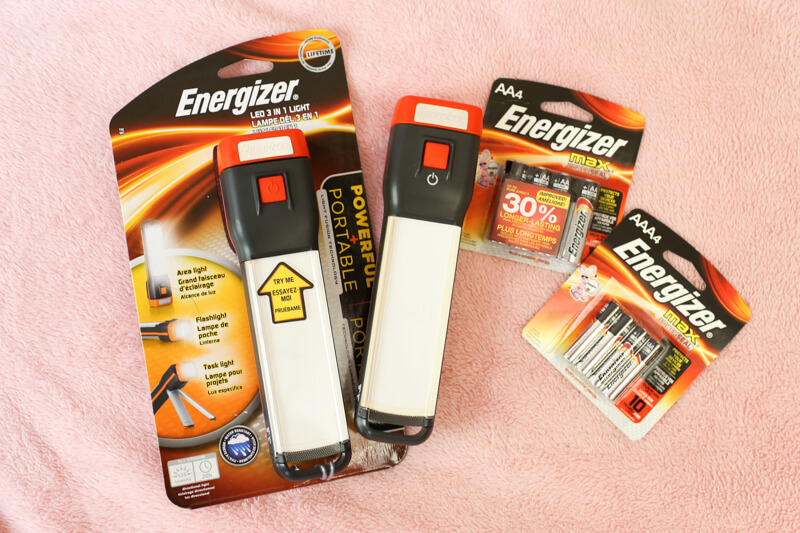 In my new book, The Superkids Activity Guide to Conquering Every Day, I have an activity where I teach children to make shadow puppets, to learn how shadows are made using light and objects.

So, when I got these new flashlights in from Energizer, I was so excited to actually do the activity with my four-year-old who was struggling so much with the idea of monsters in her bedroom.

The Energizer® Multi-Function Light with Light Fusion Technology™ is truly the Swiss army knife of lights. Use it as a bright handheld flashlight, unfold the tripod legs and enjoy hands-free directional light, and pivot the head to aim the beam wherever you need it most (like big hairy monsters). One great light, many great uses.

From all our talks over the last few weeks and months, I knew she was going to need a little bit more than just a couple of shadow puppets made out of cardboard. But I also knew that we could have fun along the way.

She loves to go in the bathroom and shut off all the lights and close the door and turn on the flashlight and see what things she can see that she didn’t notice in broad daylight. So, I knew that she was going to love this activity.

When my daughter was fully rested and in a great mood, we headed up to her room with our flashlights in tow. I explained to her that we were going to try to figure out exactly what was happening in her room at night that was causing her to think there were monsters in the room. 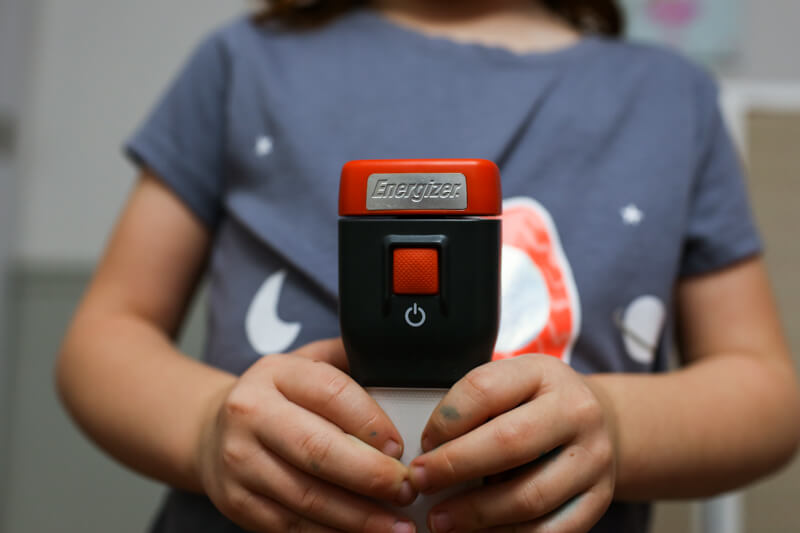 Immediately, she turned to me and said, “Duh, mom, it’s shadows.” Like she had known all along.

I wanted to say, “Okay, well if you know that it’s shadows, then why are you so scared of monsters at night?”

But, instead, I nodded and played along. “That’s right, honey. It’s shadows. Why do you think the shadows are making you think that you have monsters in your bedroom?”

So, I turned to my daughter and I asked, “What in your room do you think is making a shadow?”

And, proudly, my four-year-old turned to me and said, “Light, mommy. Light from the window and light from under my door.”

“That’s right. Light causes shadows. But what is the light running into?” That had her a little more stumped.

“Maybe the lamp?” she said hesitantly.

“All right. Maybe the lamp. Let’s draw a lamp.” So, I got out my marker and I drew the outline of a lamp and cut it out.

“What else do you think could be getting in the way of the light?”

“Okay. Maybe it’s your chair. That would make a funny shadow.”

“Yeah. It would be tall and spiky,” she replied.

So, again, I got out my marker, my paper. I drew a chair and cut it out.

We did this over and over again until we had about seven to eight items.

Then we turned them into puppets. Nothing fancy. We just turned them over, added a Popsicle stick, and a little bit of tape.

Now we were ready to play. 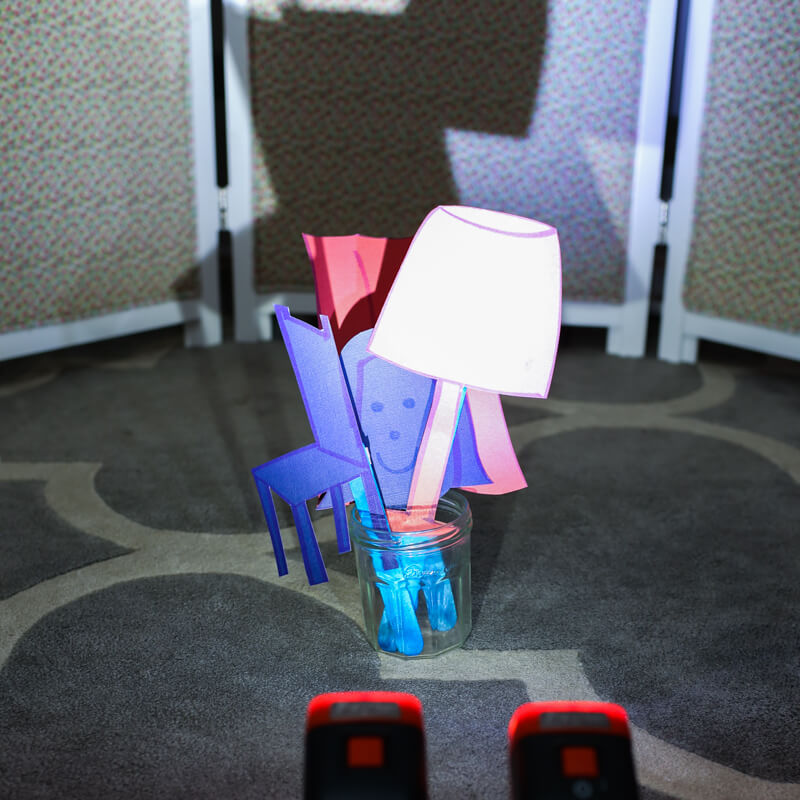 We set the stage and set up our light source with our new flashlights.

They are perfect because they have a little stand, so they shine directly on the wall without having to hold the flashlight. 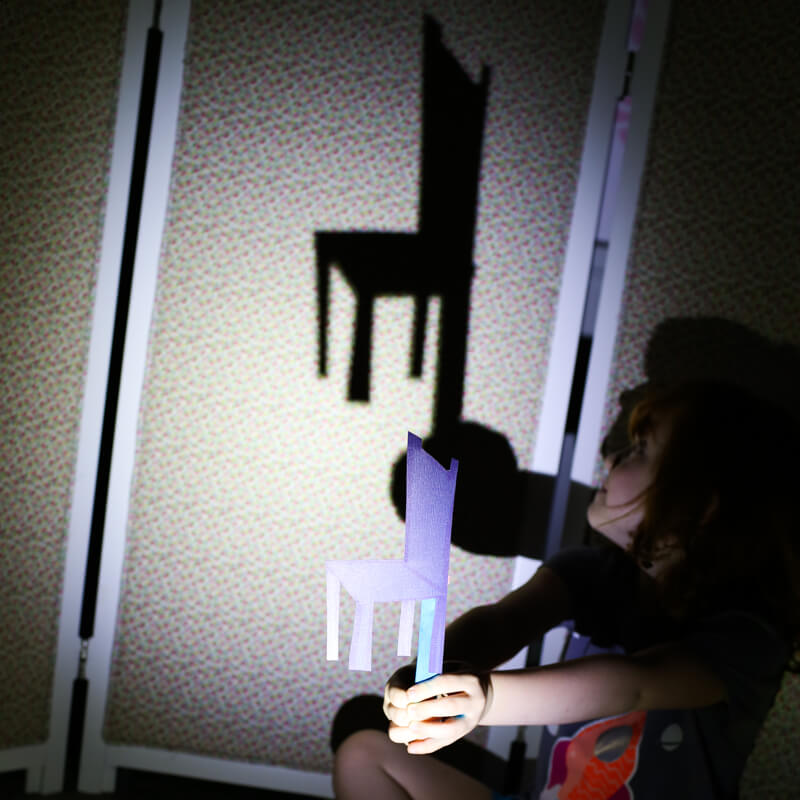 One by one, we explored what would happen if we put the items that we had drawn and made it into shadow puppets in between the light and our stage. 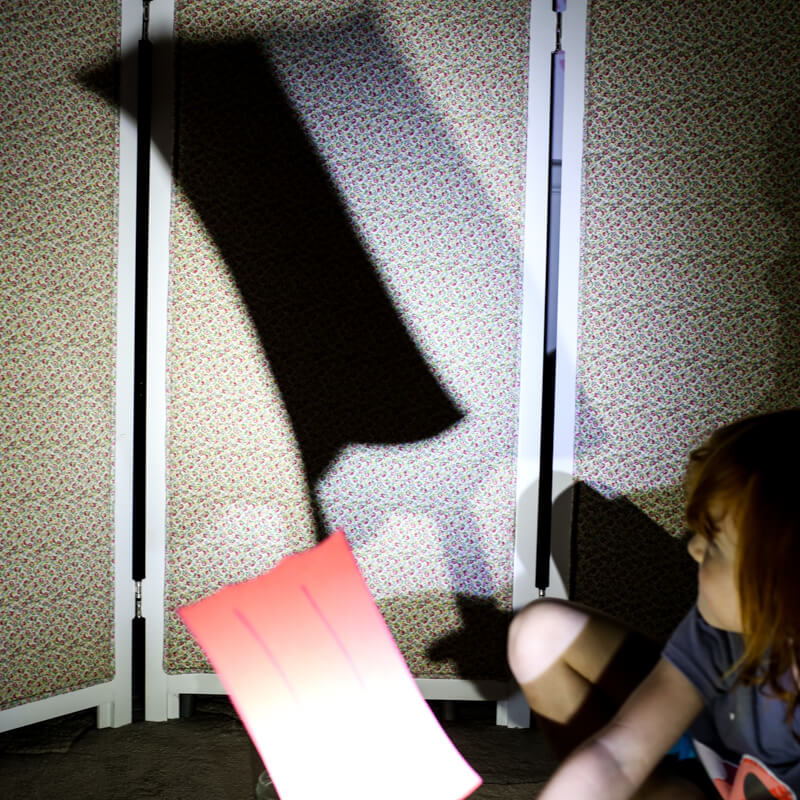 “Mommy, look. The shadow is big,” she said as she put up the puppet of her curtains. “And look, it gets smaller when I get closer to the stage, and further from the light.”

There’s something magical about watching a preschooler have that a-ha moment about the way things work in the world. She did this over and over and over again. With each one, she was realizing that the monster she was seeing were actually items in her room.

But she didn’t stop there.

Next, she grabbed the real items in her room and wanted to see what the shadow might look like. First, she grabbed her doll and she said, “Mom, I bet this will be a big shadow.”

But what happened next completely surprised her. 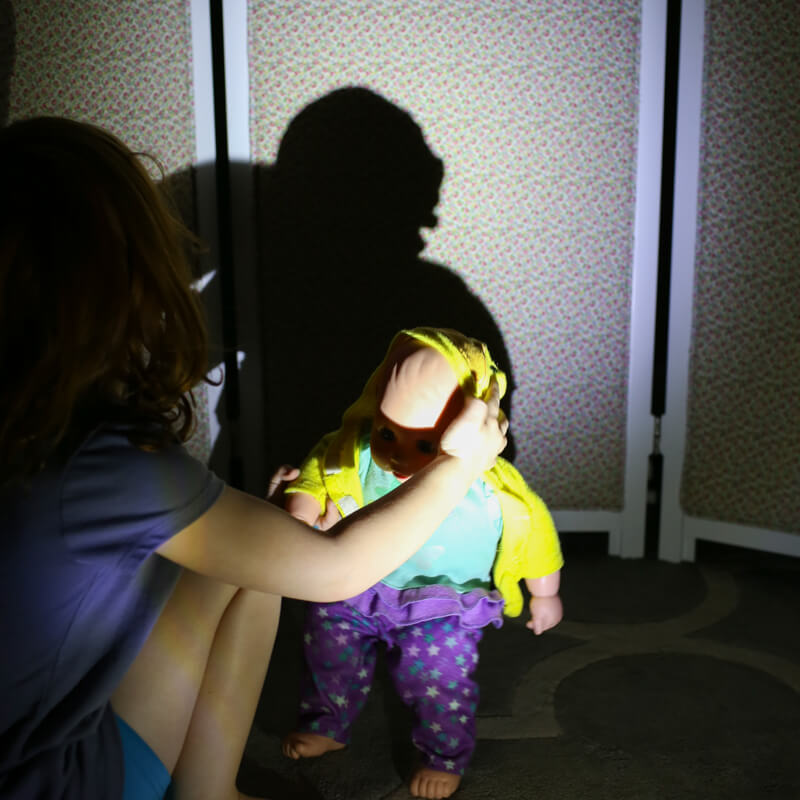 As she placed the doll in between the flashlight and the stage, her eyes opened wide as she exclaimed, “Mom, it looks like a human. A big, tall human is in my room.”

With that simple science activity, she realized that even the smallest thing could turn into a large, scary thing if it’s unknown.

But by simply investigating and digging in, she was able to realize that the shadows that were happening in her room, that were causing her so much fear, were all there because of science.

She continued to play with the flashlight and her dolls and the mirror for at least 30 to 45 minutes, investigating what each item would do when it came in contact with the light.

Finally, when she got tired, she cuddled up in her bed, grabbed her favorite book, flipped the flashlight to a reading light, and read her favorite story. 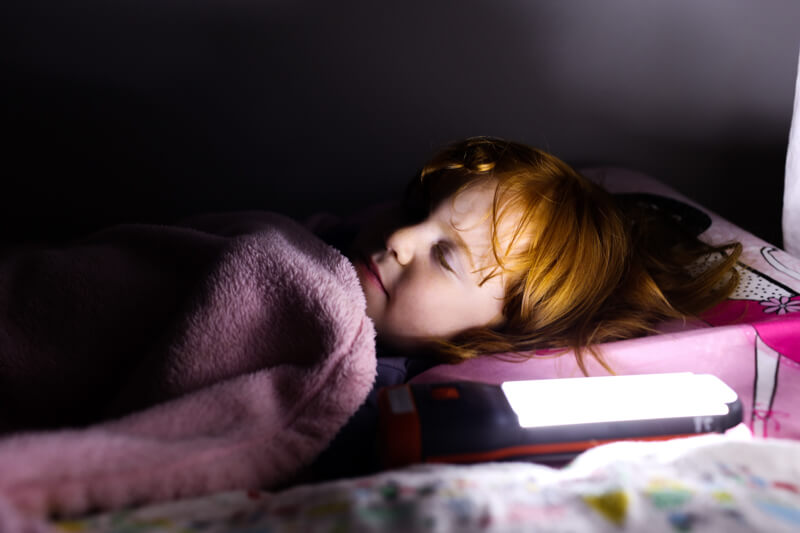 She turned to me and said, “Mom, I’m not afraid of monsters anymore. I know they’re just shadows. And I know that sometimes they look different because they’re different things in my room.”

Now, I’d like to say that she never, ever will climb in my bed again, but you and I both know, mama to mama, that that is just not what’s going to happen.

However, I can rest a little smoother knowing that she’s not going to have that fear and that anxiety at the end of the night because she understands the world around her just a little bit more. 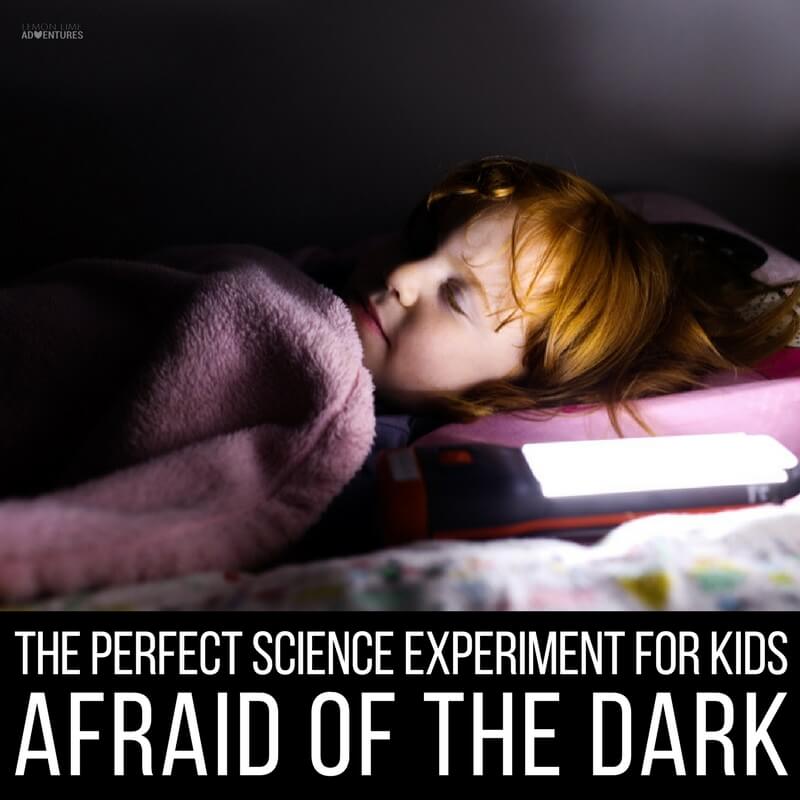 So, when you head to the store to grab your school supplies, you might not be thinking of the monsters in the closet. Let Energizer take care of those for you!

While you are at it, don’t forget to stock up on Energizer batteries. We keep our house well stocked with these for all our toys, gadgets and gizmos. I can’t even count the number of times, Energizer has come to our rescue. And you know what else, now bedtimes are a little smoother thanks to Energizer!

So tell me, what shadows keep your kids up at night? Would this simple science experiment help your kids with bedtime and the “Monsters under the bed?”

This is a sponsored conversation written by me on behalf of Energizer. The opinions and text are all mine.