I don’t know about your kids, but mine are obsessed with LEGO AND Star Wars! If you are a regular here, you know just how much we loveLEGO® around here! Recently, after playing with a new Lego Star Wars construction set, the boys decided it would be really cool to have their own DIY lightsaber that really works, so that is exactly what we set out to do, but not before checking out our new Lego construction set from our sponsors! 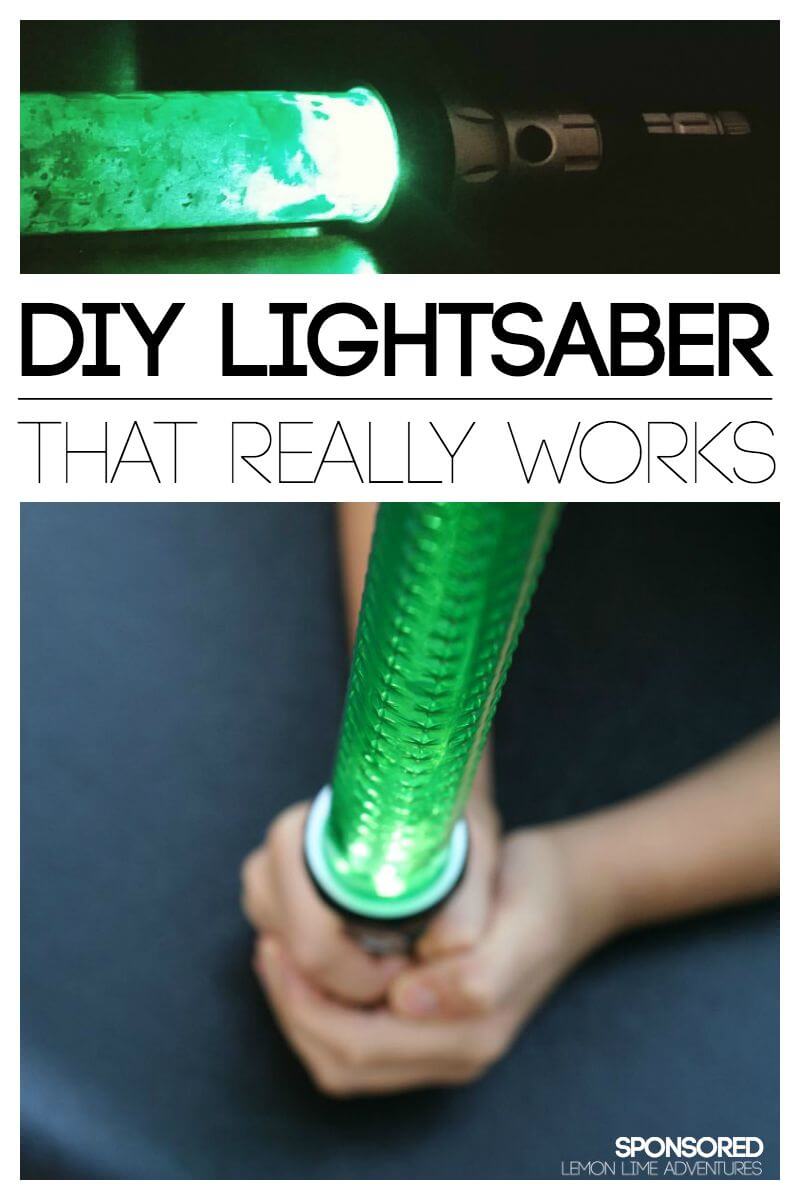 Recently, we got to work with LEGO Star Wars™ and check out the new Droid Tales series while playing with some awesome new LEGO. Most of the time around here, its me and the boys hanging out, however when it comes to LEGO, my husband always seems to immerge! This time since Star Wars was involved, he was even more interested! 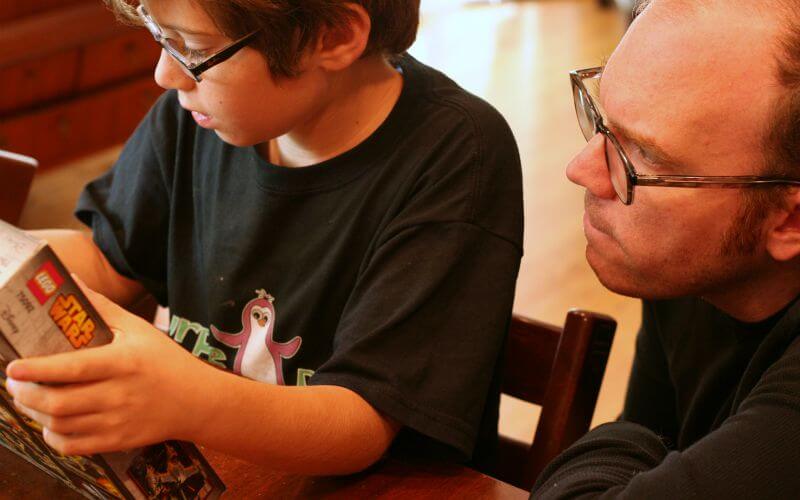 As soon as the LEGO set arrived, they “guys” were in full Star Wars chat. I wish I could say I understand everything they were saying, but unfortunately my Star Wars terms aren’t as up to speed as I remember when I was a kid. Fortunately, my husband loves Star Wars.

Luckily, because LEGO® Star Wars™ puts a humorous spin on the Star Wars universe – thanks to the specials like Yoda Chronicles, Padawan Menace and now the funny Droid Tales series – adults have as much fun catching up on the Star Wars story as the kids do, while they watch and build. The combination of the show, and the sets, creates a catching up experience the entire family enjoys. 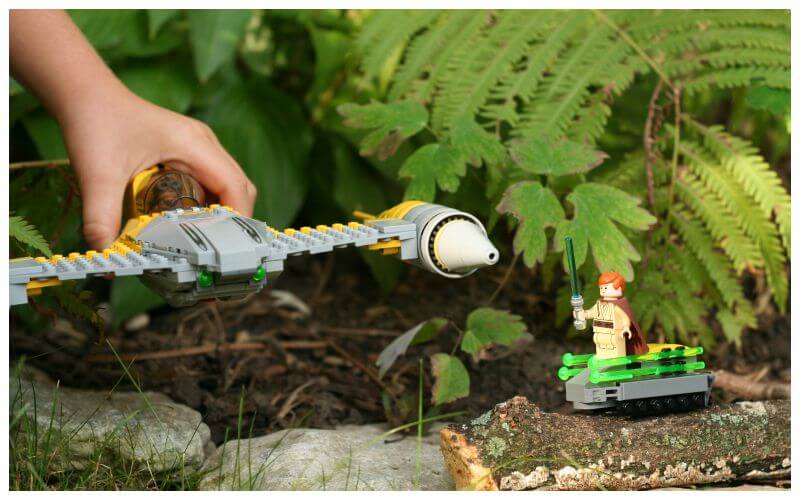 As soon as the set was built and the episode was watched, it was time to play! There is no better place to play withLEGO® Star Wars™ than in the backyard where all of the plants and obstacles can turn into planets. 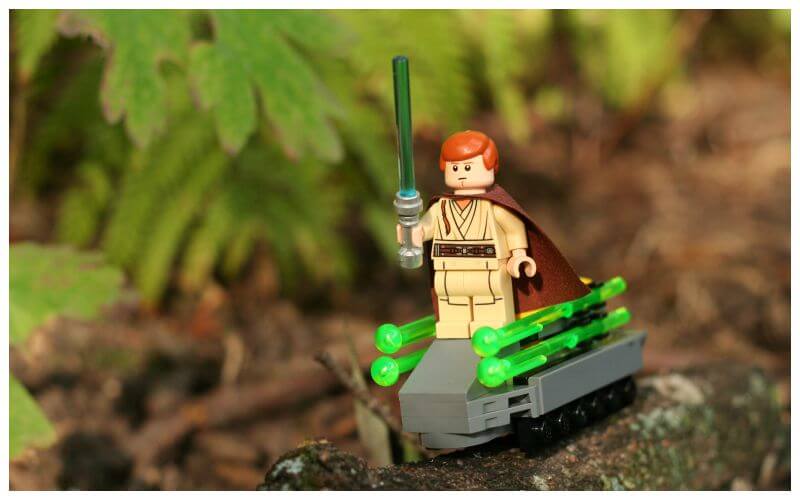 It was in this very moment that the boys decided they wanted to make their very own lifesize version of the lightsaber! After careful planning, and a trip to the hardware store with their stepdad, they were on their way to making their very own DIY Lightsaber that really works! They were so excited! Now, we can’t wait to show you how we did it!

How to Make Your Own DIY Lightsaber that Really Works 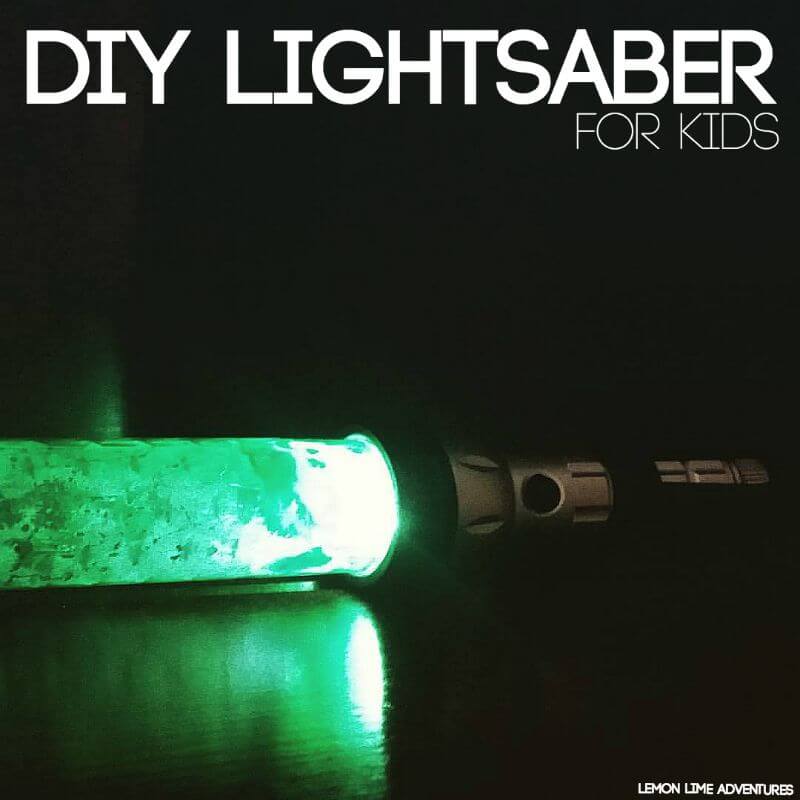 What You Need to Make Your DIY Lightsaber 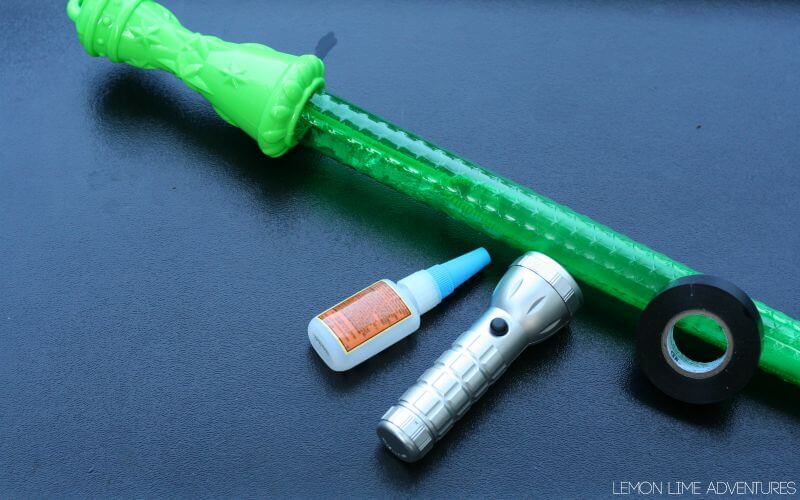 How to Make Your DIY Lightsaber

I have to say, making the lightsaber was a lot easier than I thought it was going to be! Papa was ready to jump right in and take over! If it involves electricity, he is all in! This was no different!

First the boys took apart the flashlight assembly completely and removed the “glass” circle on top to give room for the bubble wand to fit inside.

Next, they removed the light fixture from the flashlight top and kept the wires attached. They then glued the light circuit board to the bottom of the bubble wand. Once this dried, the light saber was almost done! 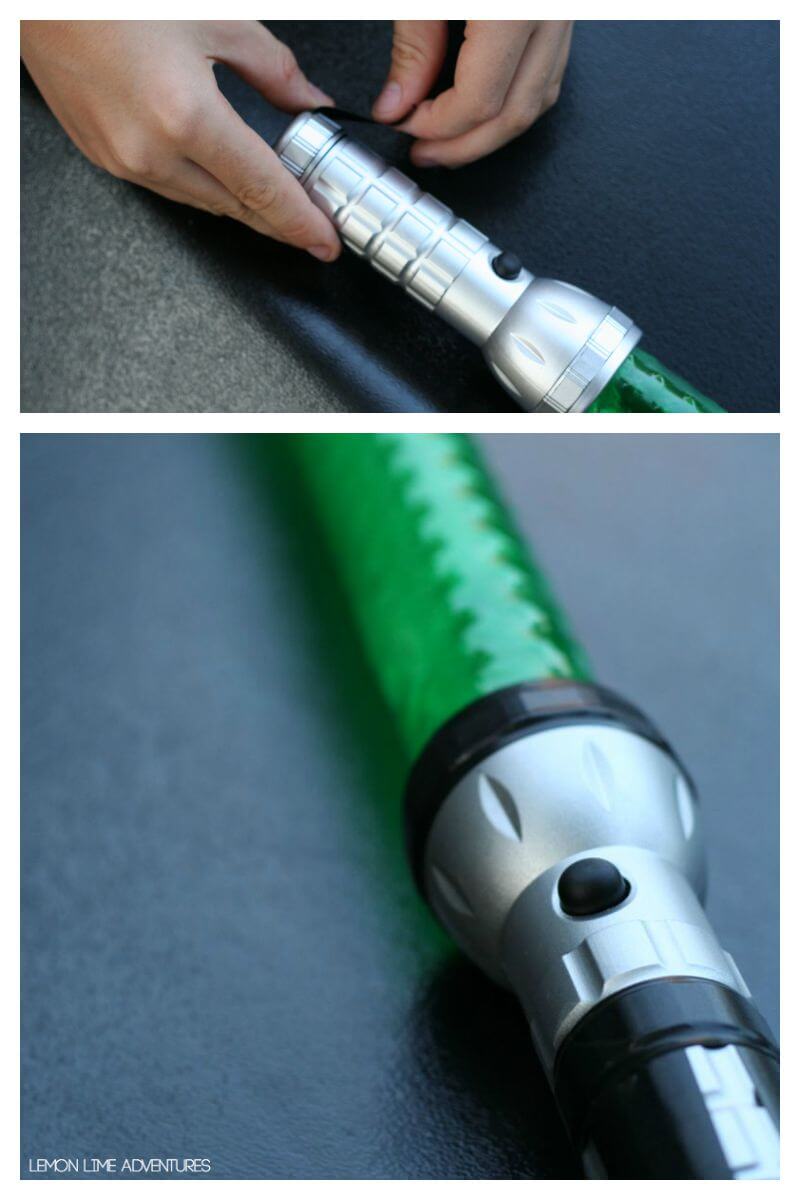 Now it was time for the hilt! This is where they added electrical tape along the bottom of the flashlight to resemble a hilt of an actual lightsaber. Now they were ready to play! 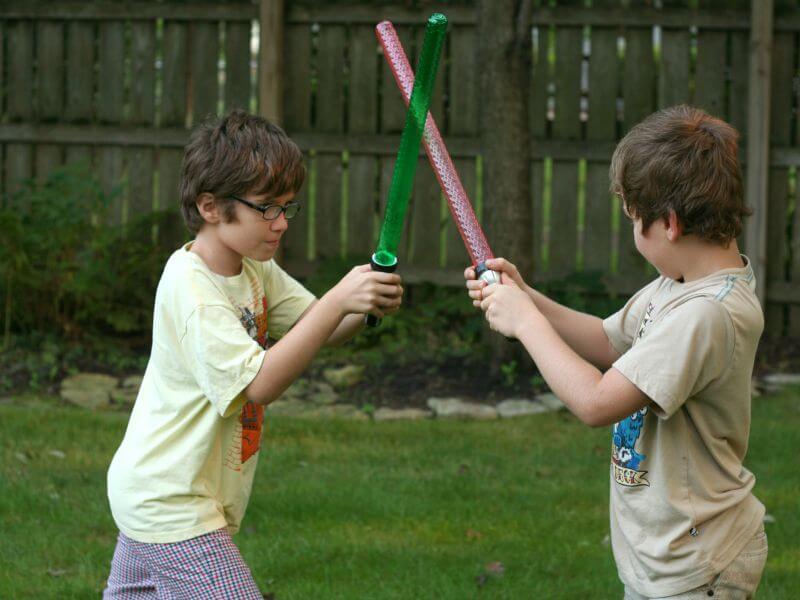 But what fun would it be if the lightsabers didn’t actually glow? So a little indoor, late night play definitely happened! 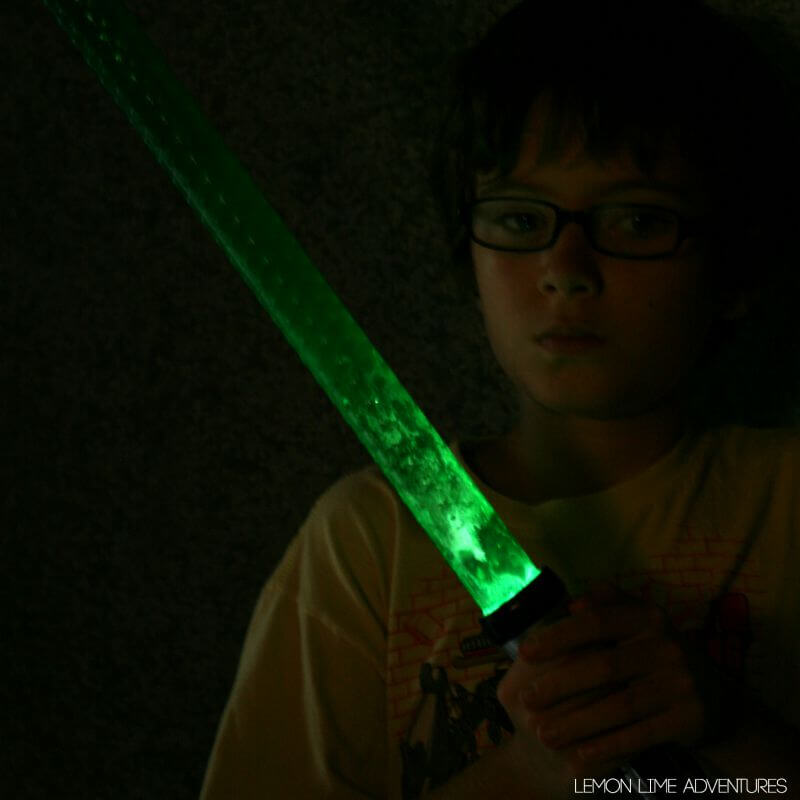 In fact, when the boys caught up on their next episode of Droid Tales, you can probably guess what they had right beside them. I’m actually pretty sure they have been sleeping with their DIY Lightsabers since they were made! Papa for the win on that one!

You can start catching up on the entire Star Wars™ saga today with LEGO® Star Wars™ construction sets and the new Droid Tales series. Click here to start building the universe, and tune in to Disney XD for new Droid Tales episodes as the perfect way for families to learn or relive the saga before the new film comes out later this year.

I was selected for this opportunity as a member of Clever Girls and the content and opinions expressed here are all my own.

If you like this, you’ll love these other LEGO Adventures 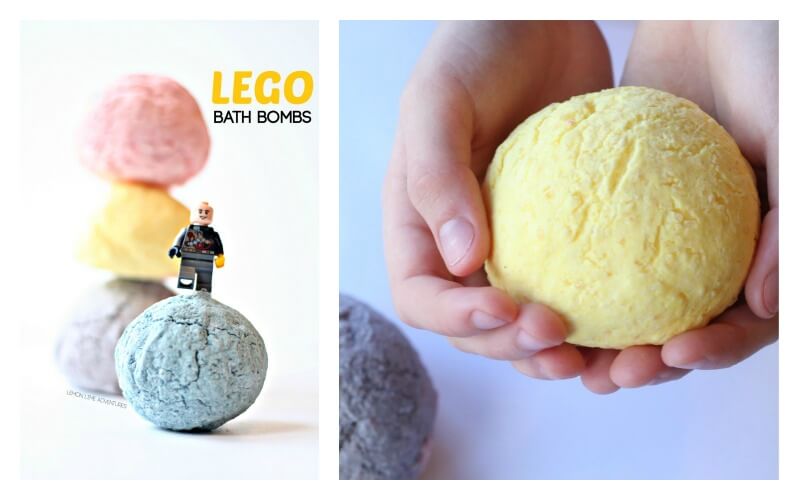