We are loving exploring weather science for kids, and this Snow Storm in a Jar has to be one of the coolest we’ve tried yet! 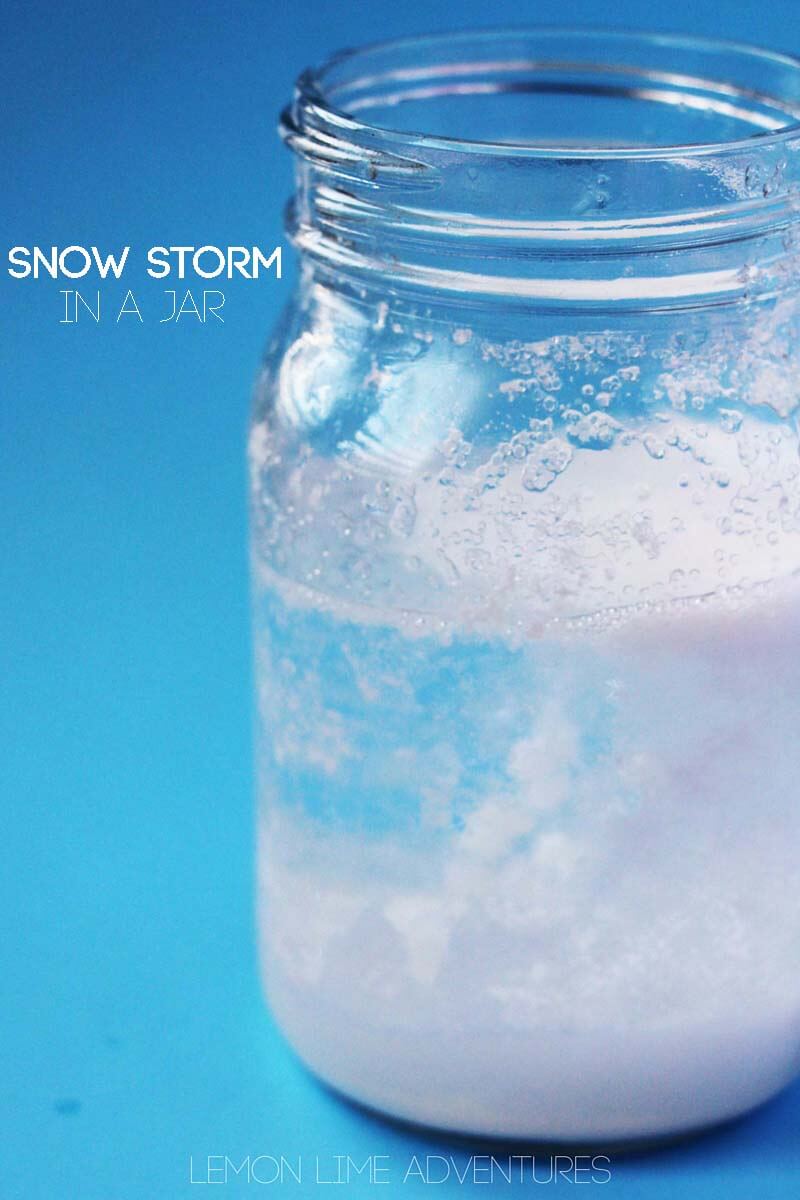 This Snow Storm in a Jar is a super safe and easy science experiment for preschoolers or elementary-aged children.

It’s a great science experiment to try if you’re stuck in the house from a snow storm – or, it’s been awhile since you’ve seen some snow.

And even better, this jar can be reused for weeks on end! Our jar still erupts into a snow storm whenever we pull it out – and it’s been three weeks since we made it. (I’ll update this post when I know how long it will actually last for.) 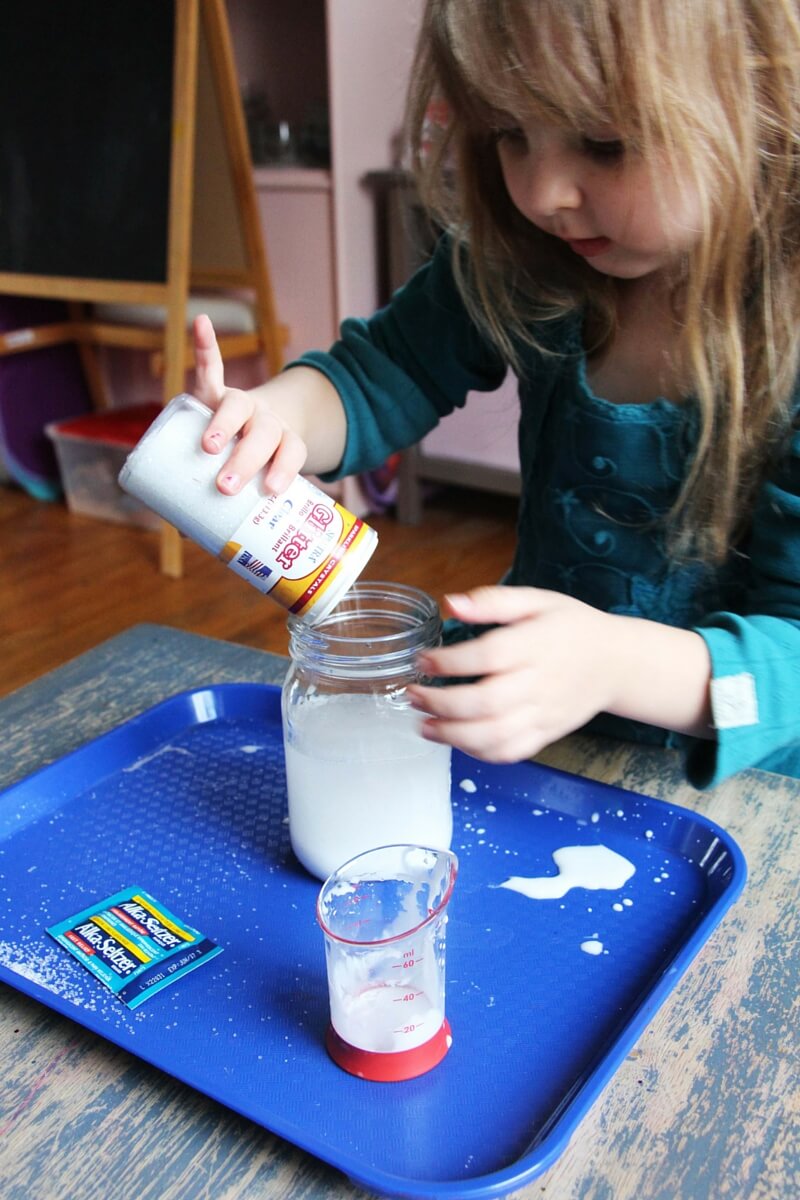 How To Make Your Own Snow Storm in a Jar

I used one cup of baby oil and 1/4 cup of water, but you’re going to want to adjust your liquids based on the size of your container.

Mix enough paint with your water to get a thick, saturated colour and stir it to ensure that the paint is evenly dispersed throughout. You REALLY want to be able to notice the water when it “storms” into the baby oil.

Layer the white water on the bottom and then add the baby oil gently overtop. Add as much glitter as you can handle. (Considering my blog is called Sugar, Spice & Glitter – we definitely didn’t go light on the glitter!) 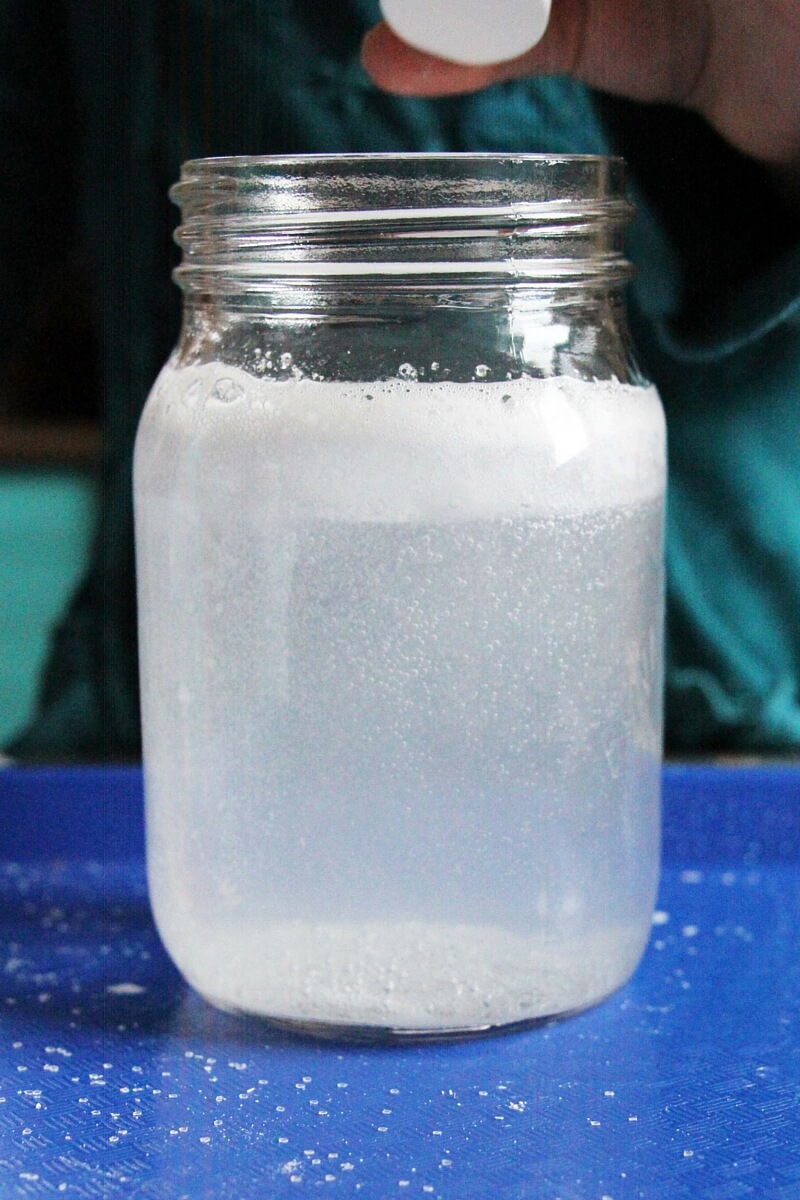 And as a special Lemon Lime twist (since we’re on Lemon Lime Adventures after all) we used Lemon Lime Alka Seltzers to create our snow storms.

Drop the whole Alka Seltzer into the jar to start your snow storm! It’s might be a bit hard to see in the pictures, but the Alka Seltzer sends the water cascading up in waves and bubbles, with the baby oil slowing everything down so you can observe the storm in slow motion. 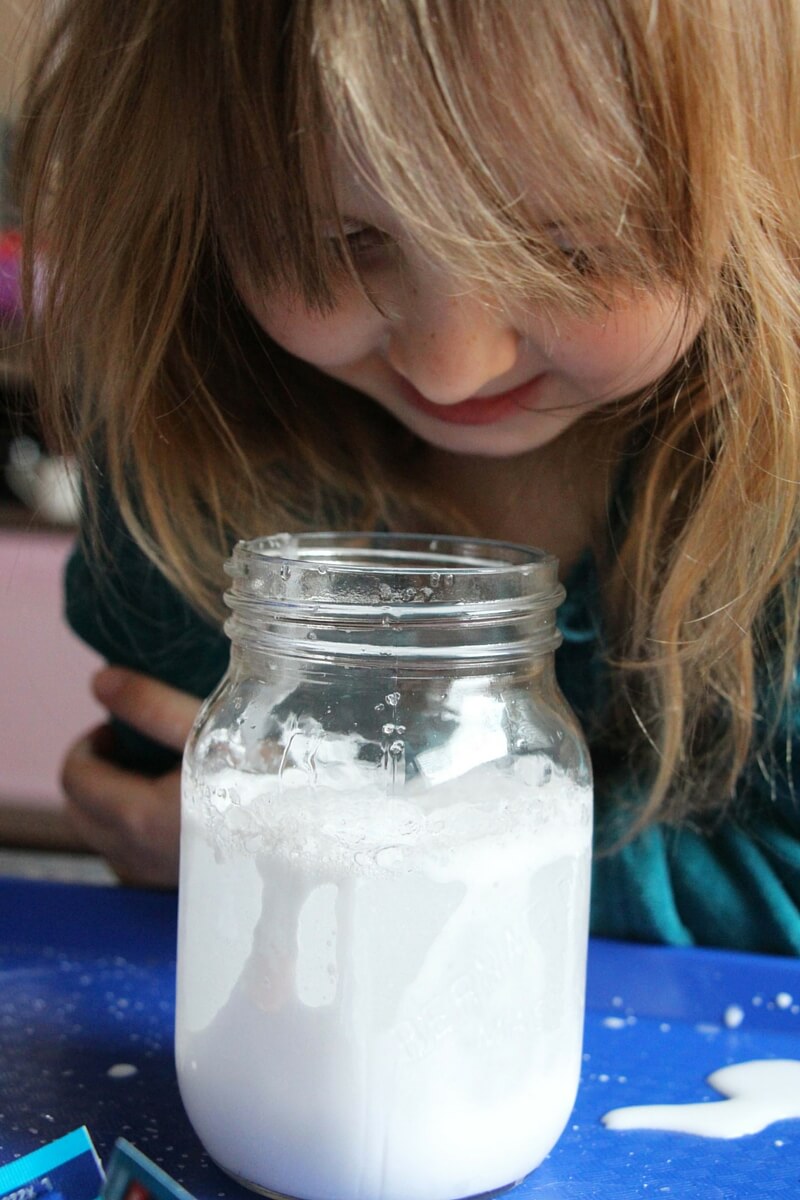 And just in case you were apprehensive about adding in the glitter, look how shimmery and magical it makes the the “snow” look!

Also, the density of the two liquids comes into play. The oil is less dense than the water, so it sits on top and exerts pressure downwards onto the water. The Alka Seltzer creates force pushing the water up, but the oil is constantly exerting pressure on it.

And another dimension to this science experiment is the reaction of sodium bicarbonate (baking soda) with citric acid when mixed with water to form bubbles of carbon dioxide gas. (This is the same chemical reaction observed in our homemade bath bombs.)

That’s a lot of science in one jar! 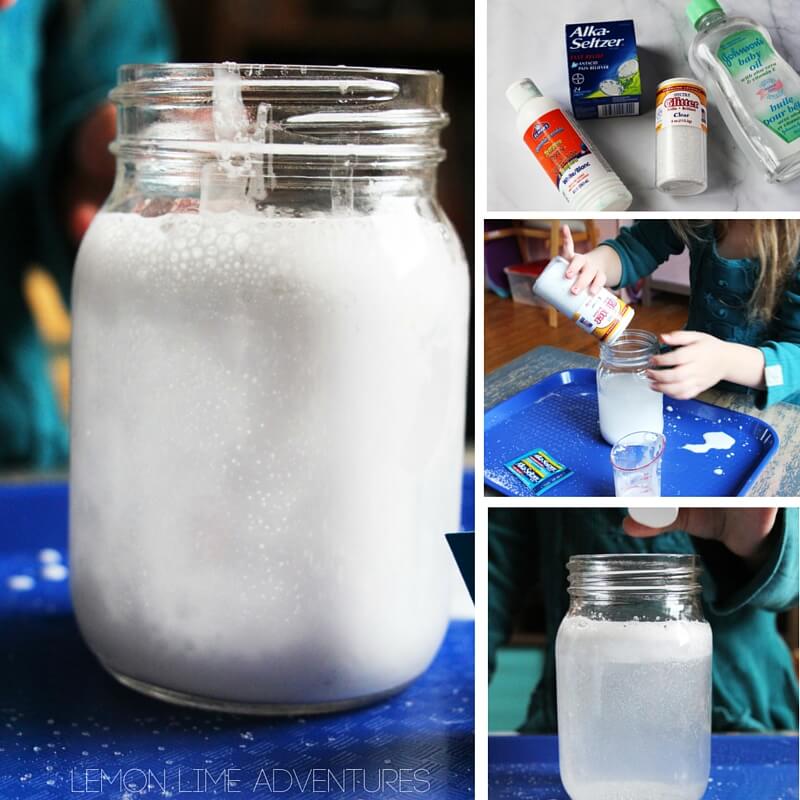 Would your kids enjoy making their own snow storm in a jar? 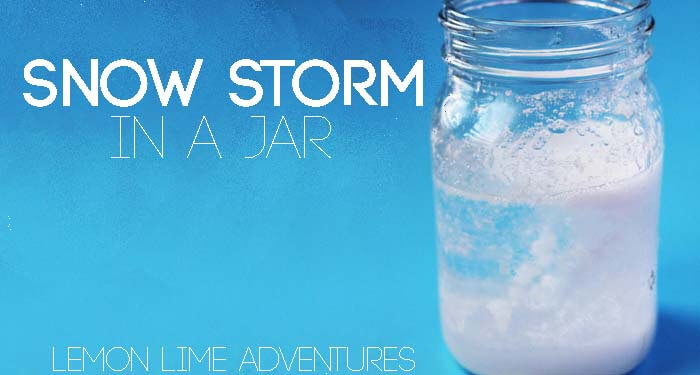 For more adventures in Weather Science for Kids: 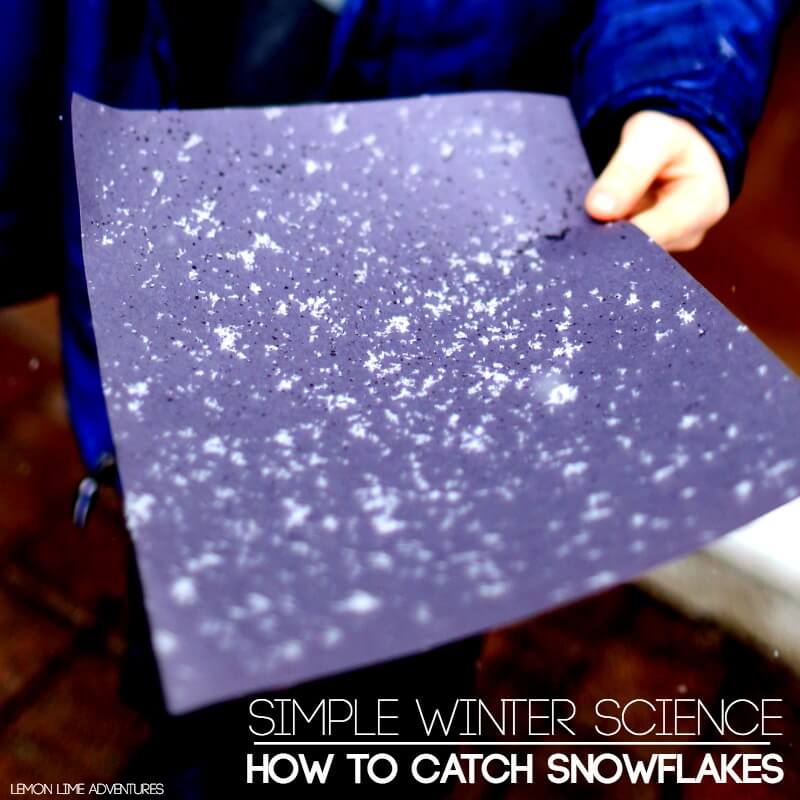 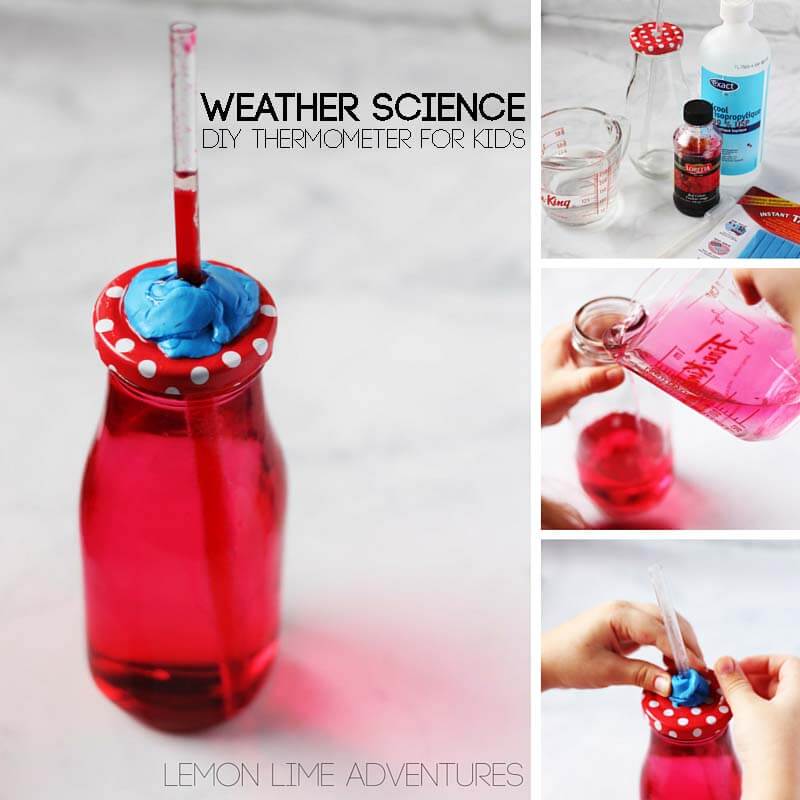