You can’t even go to the bathroom without fighting happening. If that is you, then you definitely need to stick around today because I have got a special guest and we are going to be talking all about how to go from 24/7 sibling fighting to hours of unsupervised playtime.

Even if your kids are at each other’s throat constantly, and you feel you’ve tried everything under the sun, our Calm the Chaos coach, Galikali, is here to share some simple steps you can take to transform your kiddo’s relationships. She knows, because she was RIGHT where you are just a few years ago when she first found Calm the Chaos framework.

Tell us about yourself and your family, Galikali.

I live in the UK but I’m Australian. and I’m a linguist with a background in psychology.

I was a stay at home mum for many years, basically just because of the chaos in my house. I couldn’t go back to work.

I have two very adventurous boys ages eight and six. My two boys, while close in age, couldn’t be any more different. One is extremely sensitive and the other is an out of the box thinker who likes to push boundaries. He’s really a fierce advocate for himself as well.

It’s quite an explosive combination.

What did it used to look like in your house with two boys close in age?

At the time I found Calm the Chaos, they were a five and seven, I had to supervise them 24/7. I would have to make a plan to go to the bathroom and it left me always feeling like I was in a constant state of anxiety because I just didn’t have support. It was only me and I was needed a hundred percent of the time.

The idea of me time was just laughable.

I was just drowning because I just didn’t know what to do.

I had tried all the things.

I just always thought there was just something different about my kids.

I really was fairly hopeless by that point of not really knowing what to do.

There was a lot of professionals there to help my children with the diagnosis but no one to tell me what to do at home when it was all going wrong, when one is attacking the other or one’s having a meltdown and then it setts the other one off.

It was ruining their relationship.

There was massive amounts of jealousy. They were fighting over my attention. It could be anything that happened and they would just blame each other.

Everything was was attack mode all the time.

This is just how siblings are supposed to act? Or is it?

It just rippled to the rest of the family…

I wasn’t taking care of myself,
I was on high alert.
It was so constant.
No one really liked each other.
It was such an unhappy home to be in.
The whole family was just anger and yelling all the time.  I didn’t grow up in a household where we yelled at each other, so it felt really wrong to me.

Separating them and taking away toys was our go-to strategy

When things are that bad, you start to believe that you have to lay down the law. You are willing to do anything to stop them hurting each other.

This is not what I what I thought motherhood would look like.

I wanted to be a mother from like the day I was about eight. I had dreamed of, it was an absolute non-negotiable for me to be a mother. And like I said, I didn’t come from that.

I had this wonderful expectations of what it was going to be like, and this was just so far from that. I was in that state of anxiety and I would react with anger and rage and I was so upset with how everything was.

I really hated who I was as a mother.

That’s hard to admit out loud, but I think if you’re here reading this post,  then you’ve had that feeling at one point or another because of the stress or the chaos that you’re dealing with.

All behavior is communication.

I struggled with this belief and mindset at first because if my kids were having a tantrum or whining about things I didn’t want them to behave that way, so I needed them to stop.

I felt that if I just let it happen, I was teaching them that that’s how they get what they want. It was this old behavioralist strategy that if you allow that behavior to happen, you’ll reinforce it, and you’ll teach them to use it.

I would always really struggle …

Something had to change.

It’s a Counter-intuitive Approach to Whining and Fighting

In the moment you can let the whining or yelling happen. It’s seeing the whining differently. Your children are communicating what they want. They just don’t have a very good strategy for it.

So, in the moment it’s fine to let it go.
It’s fine to give them what they want.
Then if you don’t want them to whine and you want to see a change in behavior, it’s time to get curious.

Look at the strategy that they have for getting what they want.
Do you need better plans in place so they know what’s going to happen and when,
Do you just need to work on the sort of things that they can say

The key to everything was making sure I actually knew their needs and understand their needs so that I can provide for them beforehand.

Then my children don’t need the whining. 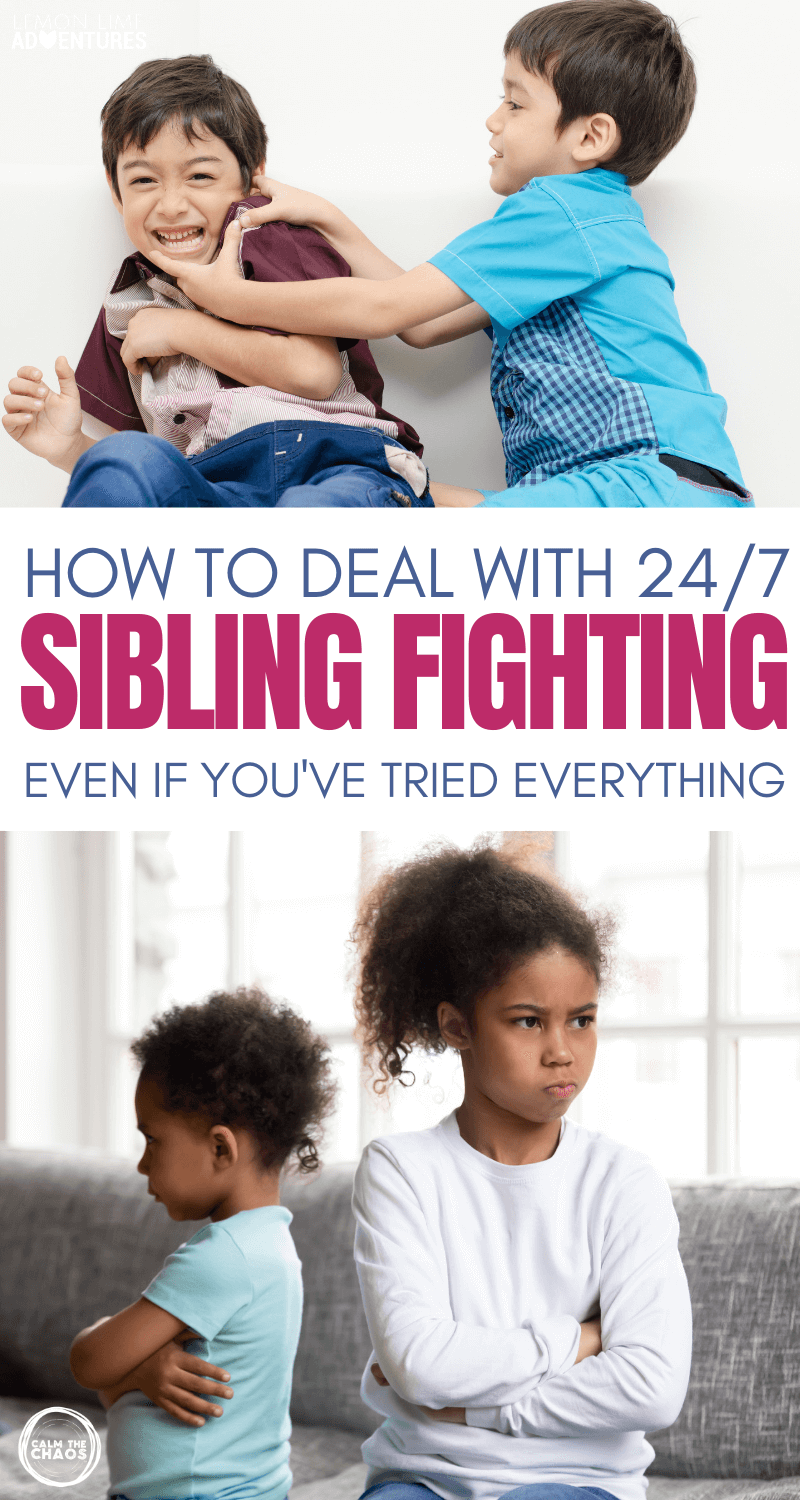 A New Plan for Sibling Fighting

At some point I realized… it’s the same with the hitting and the fighting.

If I can understand why they’re hitting and provide them with different solutions to solving the problem that they’ve encountered with their brother, then together, we can work on those solutions beforehand and then they don’t need the hitting.

They have something else that they can use because their hitting is just communicating that they are upset and they don’t like this.

Related: How to End Sibling Arguing

Step One: Build Connection Between Siblings

The first step was working on their relationship so that they felt better about each other.

Then they were willing to start working with each other. 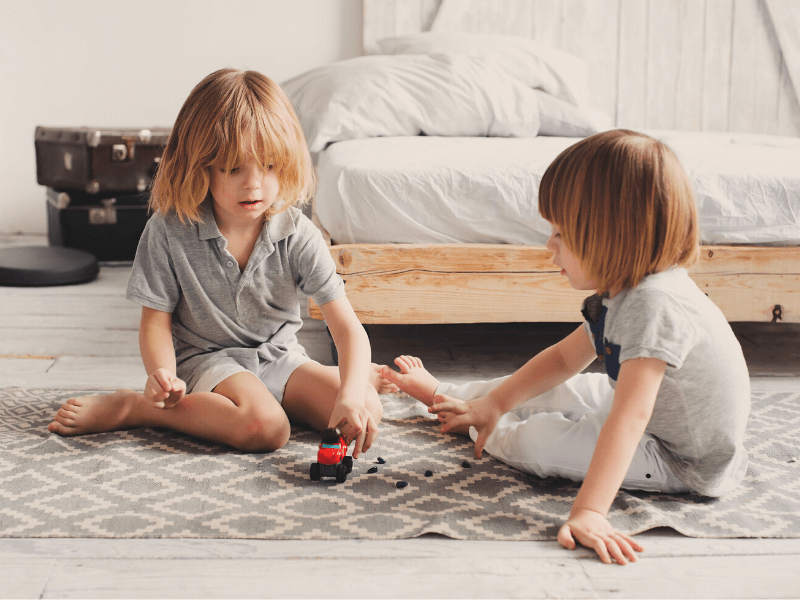 Related: How to Get Siblings To Play Together Kindly

Next… we had to get rid of some of the assumptions that were happening.

We had assumed that my oldest was the instigator of fights and that we needed to work with him.

But actually when we dug deeper and tracked exactly what was happening before, and before that, and before that… we could start to see that the bigger problems was “the blame monster.”

They saw intent where there was no intent. 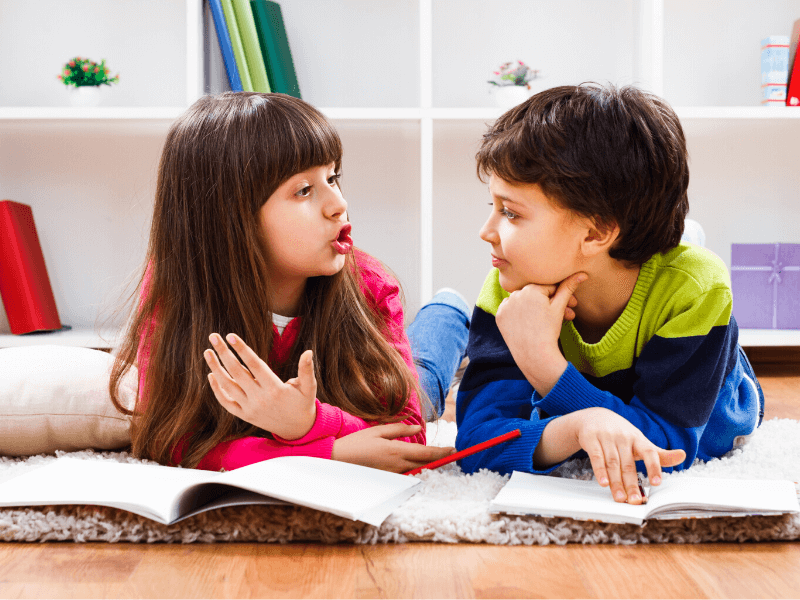 Step Three: Create Scripts and Make a Plan Together

After removing assumptions as the parents we had to work together to help our kids do the same. We worked together to come up with things that they could say when they were hurt by their brother.

Using this idea staying curious, rather than just jumping to blame.

So instead of… ” you idiot, you did that on purpose”, I’d have them say “why did you do that?”

However, we found with my son because he really struggles with impulse control, it was sort of that immediate thing to just rush in and attack.

But when we asked questions, it kept him in thinking brain and it keeps him in being able to listen.

We even made posters to make things more visual. 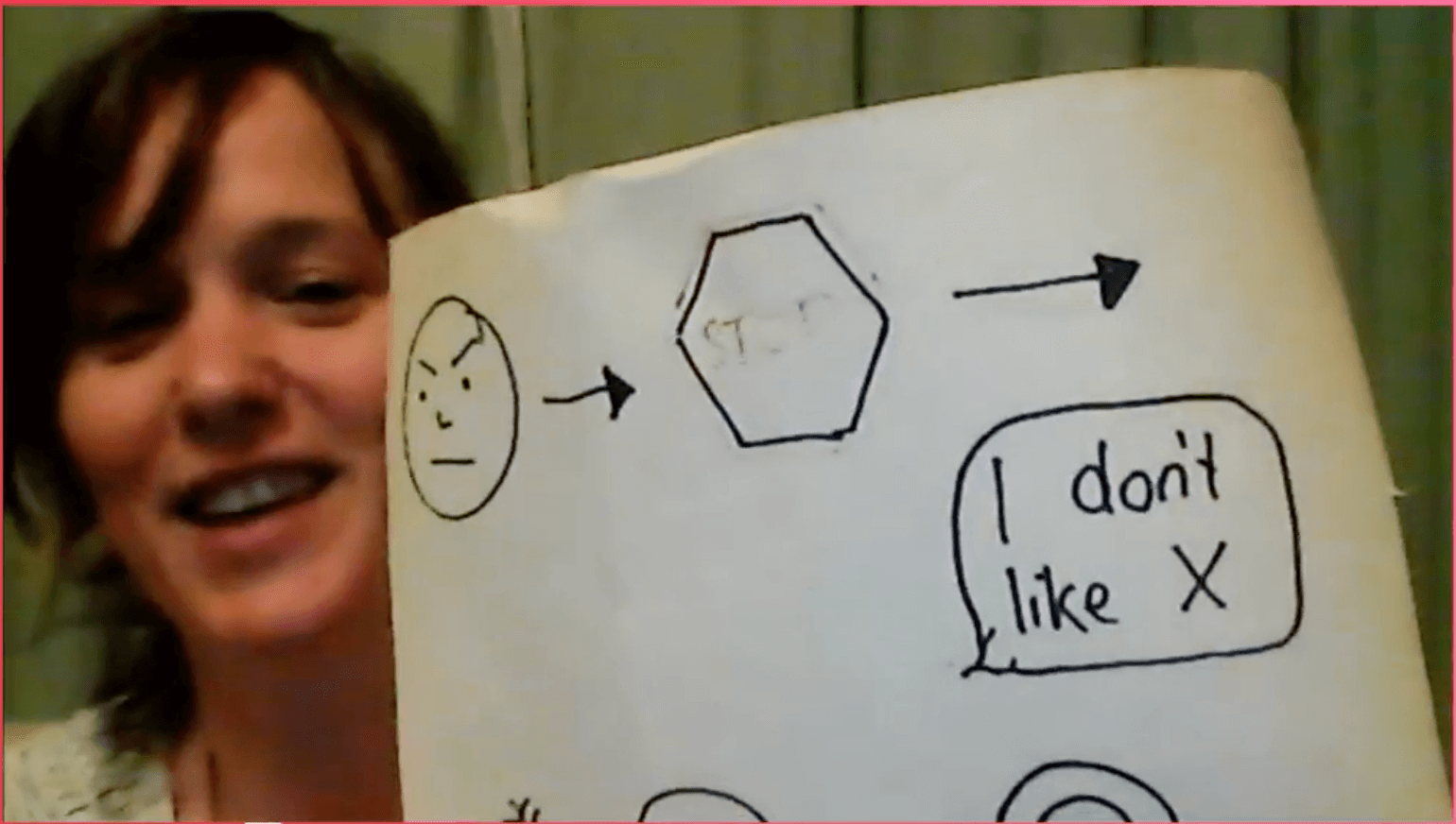 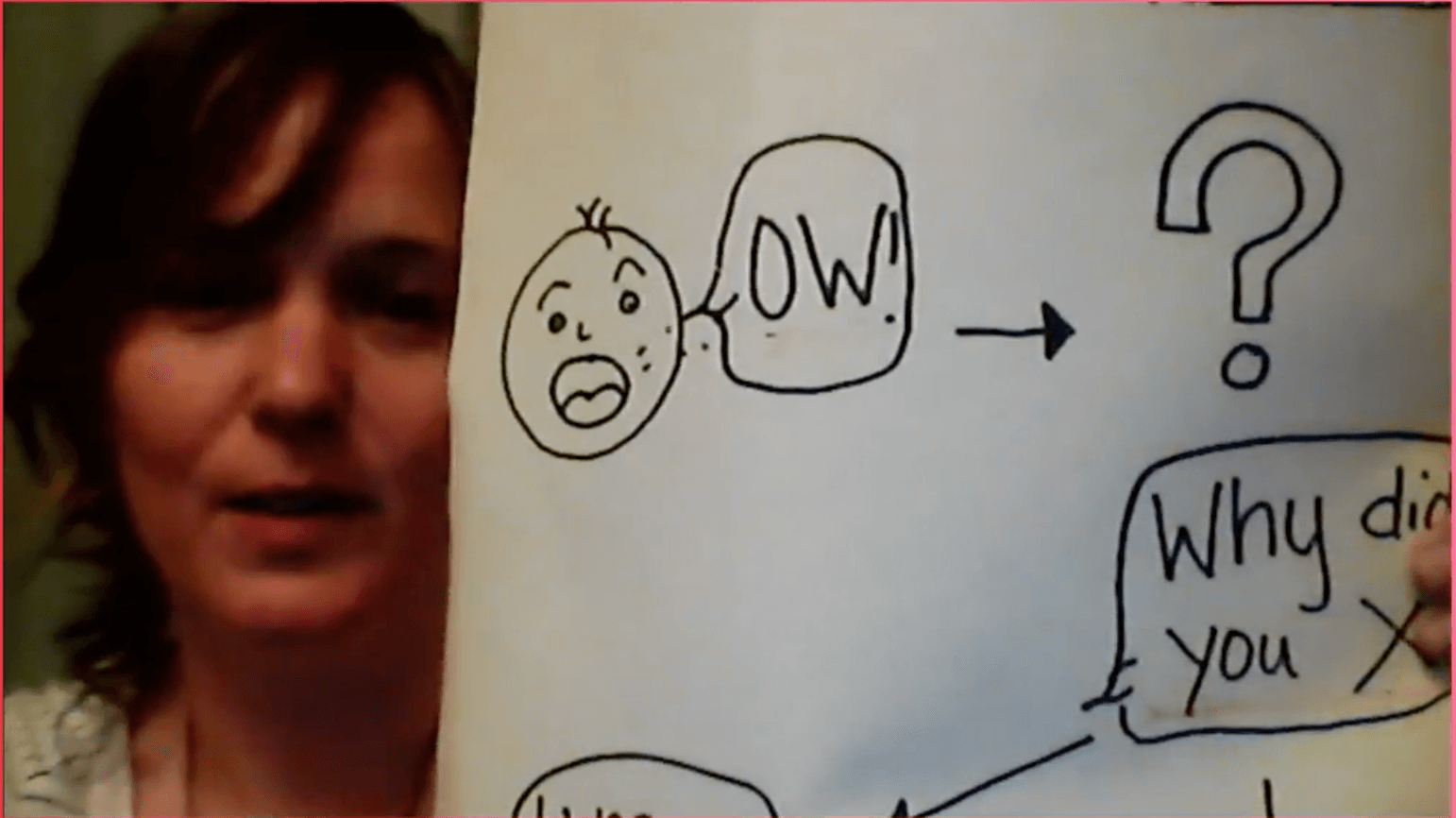 “I’m angry.
Why are you angry?
How ca we solve this together?

Here is they key. These are all done AHEAD of moment, not in the moment. We practice as much as we can. And then when they are in the moment and hear one of these key trigger words, hopefully they will use it. And if they don’t, then I can prompt that word.

Now to recap how we ended 24/7 sibling battles.

The first thing we needed to do was build up positive interactions between the boys.

We had to set them up for success.
We had to make them feel like they were on the same team.
They’re on each other’s side.
We did a lot of work there first

Next, we had to dig under the surface and figure out why the behavior was happening in the first place and remove assumptions.

Finally you empowered your kids with scripts.

You told me you couldn’t even go to the bathroom. What is it like now?

It’s just completely different. Now, I’ve started a job and I’m working without giving them 24/7 supervision. I can usually leave them for an hour or more.

Now, I still come in and check in on them just because you need to, but they are happy. They’re amazing.
They play together really well.
They can solve their own problems.
They make plans together before they start to play.
They quite regularly call each other best friend brother.

I’ve gone from this mum who was terrified of holidays and now we’ve just decided to homeschool our kids while I’m also working full time.

You can do this.

Sibling fighting doesn’t have to take over your days.

Sibling fighting isn’t just how life has to be.

It can be better.

I know that all these tips can be extremely hard to remember in the moment, which is why I’ve put together this free printable poster pack that has a list of phrases for your kids and much, much more!

Here’s what you’ll get:

(If you spend half your day hearing things like “STOP!” or “DON’T TOUCH MY STUFF!” this will be a lifesaver.)

Click here to Grab the FREE Sibling Get Along Poster Set