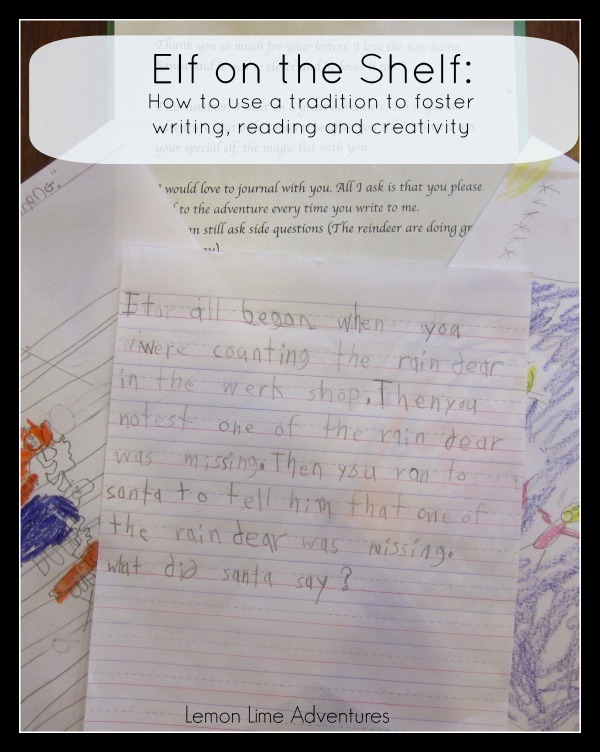 I recently posted about our Elf on the Shelf and how she became a tradition in our family. This year our elf is challenging the boys to use their reading, writing and problem solving skills to help create a “Name Your Own Adventure” story starring…

It all began with Legoman asking on Day 1 if El-fly-jah would be interested in journaling back and forth with him and Bones.

As I wrote El-fly-jah’s response, the teacher in me took over. I wanted to try to entice the boys to write for the month of December without forcing them. I wanted to create a reason to write! 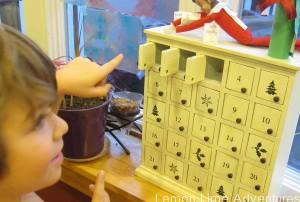 The next morning Bones was the first to spot El-fly-jah and her note. He patiently waited for his brother to wake up to read it to him. This is what it said…

Each day I plan to come back to this post and update the progress on the “Name Your Own Adventure.”

You can view all of the photos in one place here!

Want the Whole Story… As It Unfolds?

Day one: Elf Ask Boys to Write an Adventure

“This summer, I went on a great adventure. It’s a special adventure that only comes true after you tell it. Since I am your special elf, the magic lies with you.” 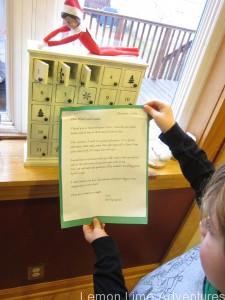 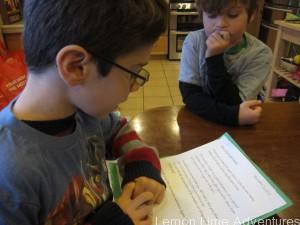 Bones immediately said “Oh, remember those deer we saw this summer? Maybe that was actually a reindeer and one was lost. Maybe El-fly-jah was looking for the reindeer on her adventure.”

So off they went.

I had to differentiate for the boys due to their varying abilities. Bones (1st grade) drew a picture and wrote one sentence, while Legoman (3rd grade) wrote a paragraph about what the boys came up with together. 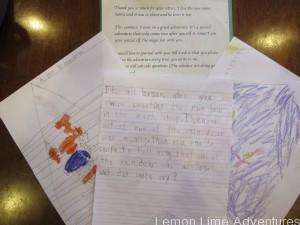 Today’s letter from elf was a detailed story about how she remembers losing that reindeer and how she felt. She tells the boys that she will give them a clue every day to help them write the adventure and help her remember what happens next.

“As soon as I got to Santa, he opened his arms wide and said “Now, now Danger! Don’t be so upset. Whatever the problem, we can solve it.” Then he gave me the most giant hug anyone has ever given me and somehow I just knew everything would be okay. “ 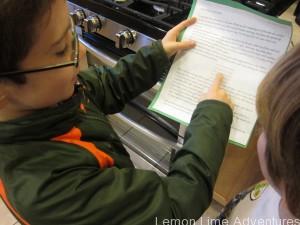 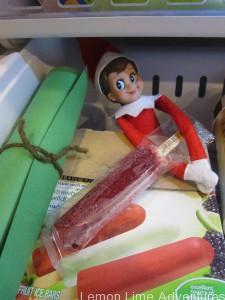 Today El-fly-jah was in the freezer (thanks Papa Bear). This led the boys to reason that because it was hot out, elf probably thought the reindeer went looking for ice cream at an ice cream shop.

So off they went to write about it. This time a little more excited than the day before.

They are off to Mr. X for the night, so it gives me plenty of time to think of an asnwer to Legoman’s question:

“What did you find when you got there?” 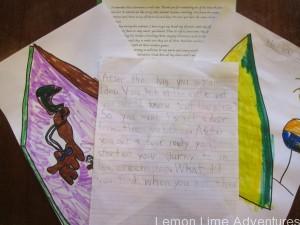 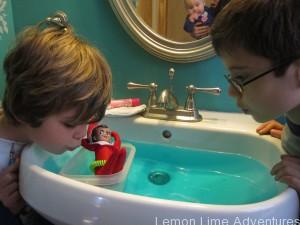 Today’s letter reassured the boys they were on the right track and encouraged them to keep helping. Elf asks them if they will keep helping tell her adventure by following her clues.

Each day I have the boys tell me what they think the clues mean and what evidence they have in the clues. I use the details they give me to write my next letter from the elf. For example, the conversation yesterday included an extensive list of ice cream flavors and a debate on what kind El-fly-jah would prefer, so I used that conversation to write today’s letter…

“Once we got the ice cream shop, we got so distracted by all the delicious flavors. They had mint chocolate chip, eggnog, peppermint, chocolate swirl, and so many more. Rudolf got a banana split with cherry ice cream and I had a mint chocolate chip in a waffle cone. It was so delicious and refreshing. Oh, but I was forgetting why went there in the first place. 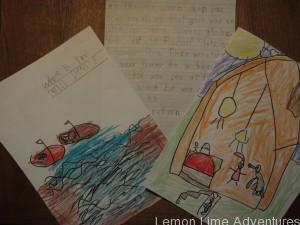 “At the ice cream shop you saw something that gave you an idea. You saw a summer globe…What did you see at the beach? What beach did you go to?

“ps. Can you give us back our journals?”- The boys want to make a book out of all of this when they are done. 🙂 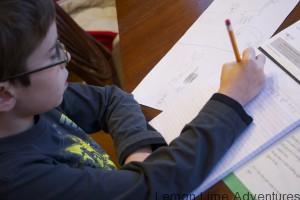 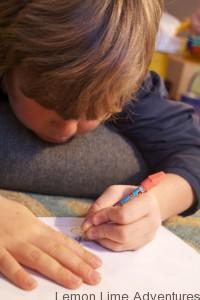 Today’s letter encouraged the boys to continue writing because El-fly-jah felt they were doing a great job writing the adventures for her.

“So I’m not sure if it was because I actually thought the reindeer would be there, or if I just really wanted a trip to the beach, but I knew where we were going nonetheless. I packed my bag with elf sunscreen, an elf towel, and my favorite elf book; then hopped on Rudolf and off we went to check out the beach.”

The clue left by El-fly-jah led to some in-depth research about the animals in Africa. The boys decided she was on an African safari looking for “deer-like” animals that must be related to the reindeer that was missing.

“Then you noticed one of the clouds looked like a gazelle. “The reindeer could have gone to Africa” you said. So you started your journey to Africa. What did you find there?” 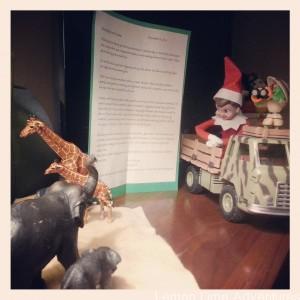 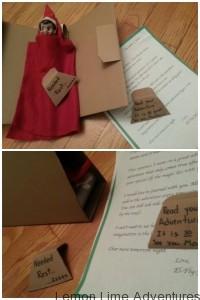 Writing the stories from El-fly-jah every day has been tiring. It is worth every minute I have spent doing it because of the way the boys have been receptive to writing on a regular basis. I was extremely tired and I felt they were too, so Elf decided to camp out and take a short rest from everything. 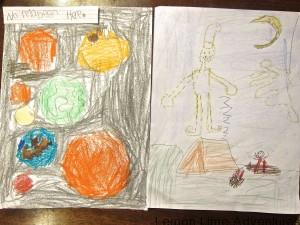 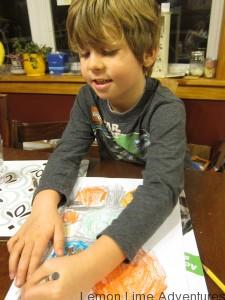 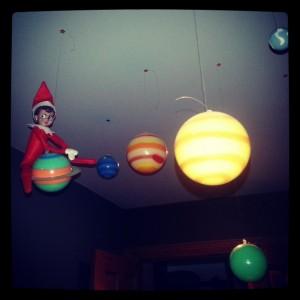 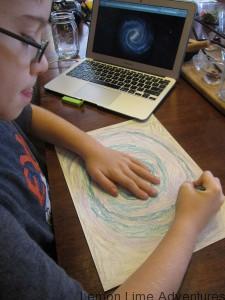 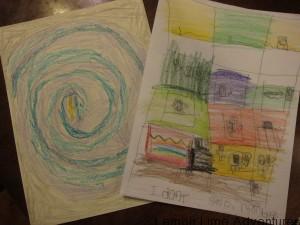 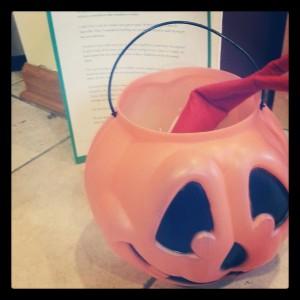 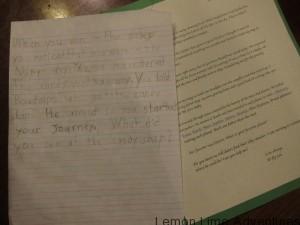 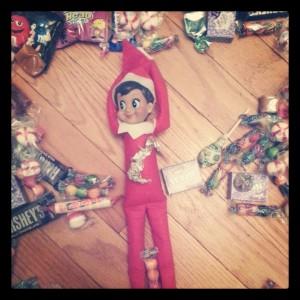 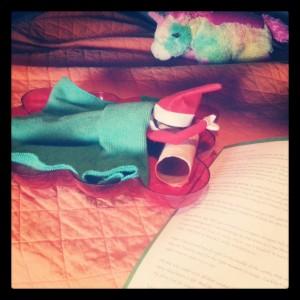 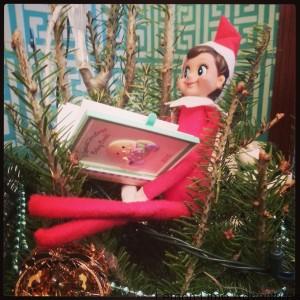 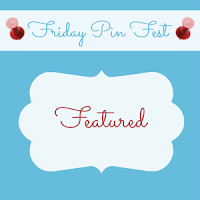 21 thoughts on “Elf on the Shelf Writing Activity”