437. That is the number of Pokemon cards my son has. I know that number quite well. I had to sit with him as he counted each and every single one. Not only did he count them, he sorted them by type, taught me about each of their evolved states and quizzed me like I was back in school. Despite his best efforts I was still lost.

Determined to connect with my son through his interests, I downloaded a new app called Pokemon Go the day after it launched without knowing anything about it. I thought it would help me connect with my son. After all, he lives and breathes the Pokemon world. Nothing could have prepared me for what really happened. I never imagined I would find so many surprising benefits of Pokemon Go for kids with special needs. 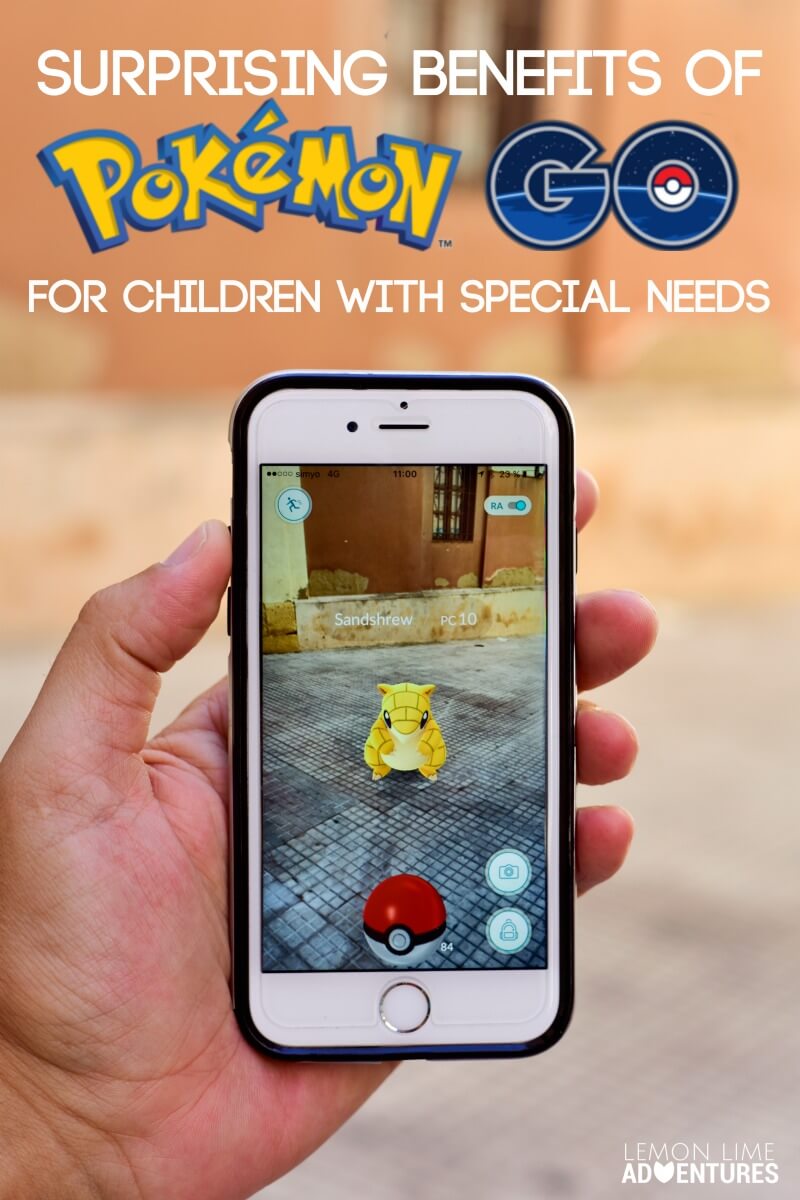 You see, if you are new here, you might not know a lot about my son. Let me catch you up a tad. First of all, my son is amazing. He has this brilliant little mind with an IQ that is in the upper 150s (before you factor in his other traits). To say he’s always been highly verbal would be an understatement. To say he’s always been into “collections” and specific topics would not describe my son with the right amount of justice. Like I said, my son is amazing. There is just one problem. Most people that meet my son, never get to meet his awesomeness.

My son struggles with sensory processing disorder and anxiety, along with a disability in his working memory (this means at age 11 he still cannot remember how to spell common sight words despite being able to read and understand multisyllabic adult level words) and a disability in processing speed (this means it takes him a very long time if ever to process instructions and he makes split decisions that are generally unsafe).

So that’s a lot of big words. Why does any of that matter if I am telling you about Pokemon Go? Well, I need you to see what my son’s world was like before this app existed.

My son is eleven. He has one friend. One. That friend is his brother. You see, there aren’t many kids that can understand the way my son plays. He can be very hard to be around. He demands attention, has to have things his way, and struggles to have a true back and forth conversation about anything he isn’t interested in.

When he was in public school, he would have epic meltdowns every day after the lunch/recess period because the process of socializing with other kids was so overwhelming for him. He internalized every furrowed brow, every kid that ran away from him, and reacted with strong emotions and physically rough play.

Any time we are at the park, at a birthday party, or family function, I have to hover close-by to make sure his impulsiveness doesn’t get him or anyone else hurt. Because, the truth is, if I look away for one second, he really can hurt someone and not even know what happened.

So fast forward to Pokemon Go. The day I downloaded it, my son had had another epic meltdown. He was really struggling. I needed to get him out of the house. I needed him to leave his room and get some much needed sensory input in the real world. In a quiet voice, I said “Hey, I have this new app where we look for Pokemon together and catch them. Want to go with me to check it out?” We had no idea what was in store for us or the awesomeness this game was going to unlock for my son.

5 Surprising Benefits of Pokemon Go for Kids with Special Needs

We have now played Pokemon Go for 2 weeks. We have figured out how to play, we have worked through glitches and frozen apps, and we have explored more of our town in just a short time than we ever have, but all that is just the tip of the iceberg. I have shed more than a few tears at milestones I continue to see my son crushing this last week, all because of this game many are calling “silly” or “ridiculous”. 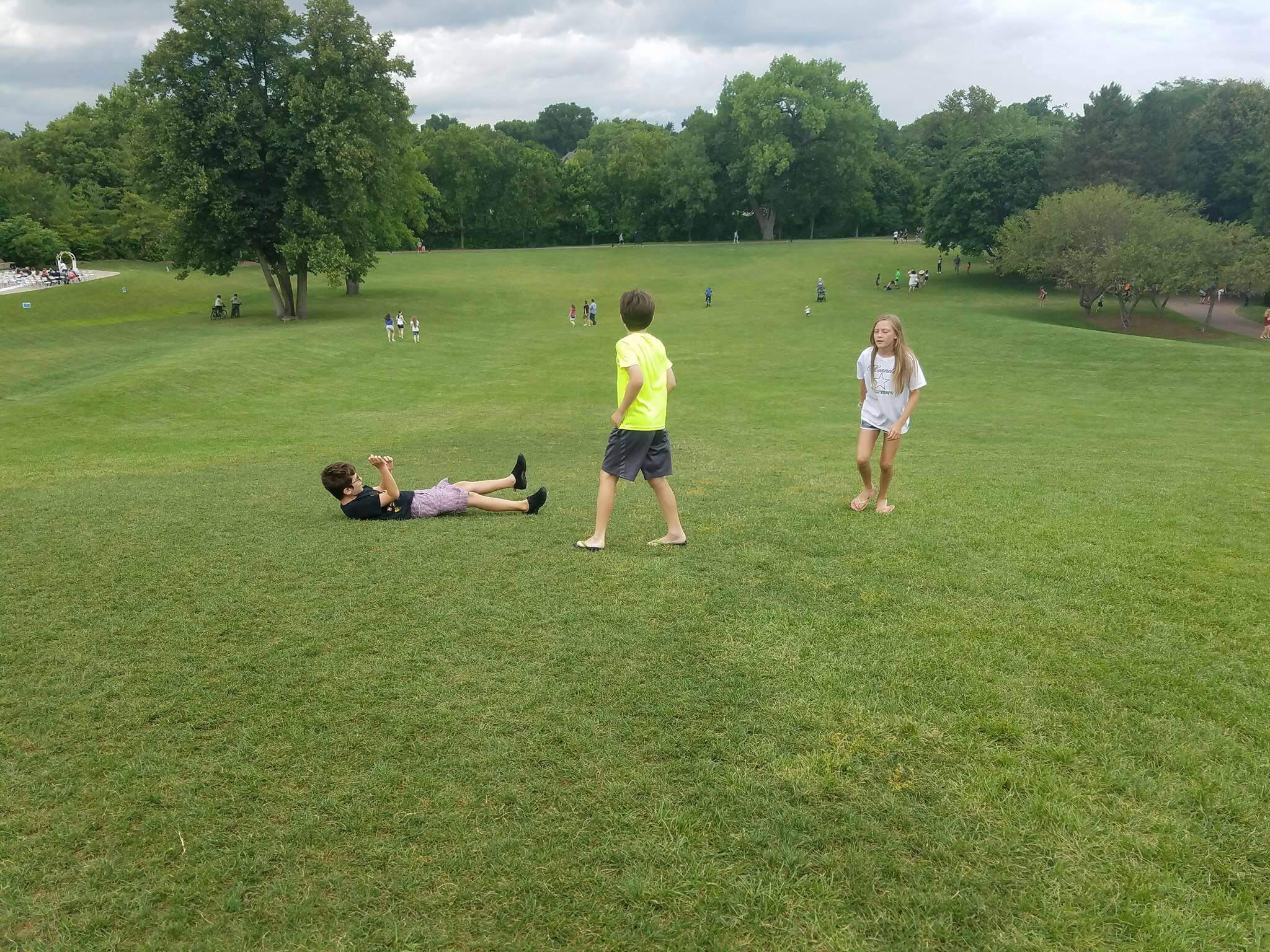 Increased Sensory Input | I know many are against giving electronic devices to children, especially children that are prone to hyper-focus on the visual stimulus and struggle with interacting with the real world. However, I have to tell you that in this past week, my son has gotten outside, climbed more trees, run up more hills, and enjoyed nature with all of his senses more than he ever has. He is motivated to find new areas to catch rare Pokemon and he is actually asking me to go outside. My son. My son that has such low-tone, he struggles to find the stamina for a family bike ride or walk, is asking me to go outside with him. The first day we had the app, he asked me to take a walk to the Library and two Poki-stops which resulted in more than a mile walk outside with my son. 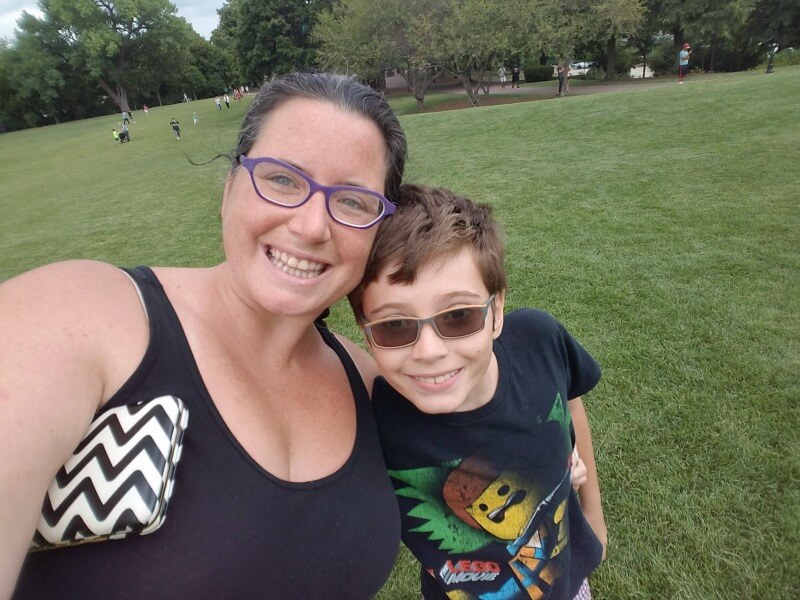 Strengthened Family Relationships | This brings me to the next benefit, I saw almost immediately. It didn’t take long before I realized this game was my portal into a relationship with my son. Some have said it is sad that we need an app to connect, but I have to tell you, when your child’s mind is locked away inside his head, you’ll take anything that might be the key. This app has been that key! On our first walk, not only did we walk together and look for our first Pokemon, my son actually held my hand. For any of you with a child with sensory processing disorder or autism, you know that physical contact can be extremely difficult. My son, because of Pokemon Go, actually wanted to hold my hand and even hugged me several times.

Reciprocal Conversation | This is probably one of the biggest changes I have seen in my son. My son that couldn’t hold a conversation that involved asking questions or involving the other person is now starting conversations with a question about the other person, holding eye contact during the conversation, and even showing interest when the conversation begins to come to a close. This isn’t just when we talk about Pokemon Go either. The first time my son saw a group of girls playing Pokemon Go, he nudged me and whispered “Do you think they are playing?” I modeled how he could ask the girls and approach them since he didn’t know them. Next thing I know, I hear “Excuse me, are you playing Pokemon Go? COOL.”

It didn’t end there. With each exposure to a new set of faces, we worked on new skills. It started with initiating conversation. Then we moved on to asking questions to show interest in the other person. My son used to just follow the acknowledgement of Pokemon Go with “well I’m a level 10 and I have this Pokemon and I did this and I did that”. You see, it was all about him.

Pokemon Go has given me a venue to teach my son to take an interest in others when this is not the way his brain naturally works. It is amazing to watch. 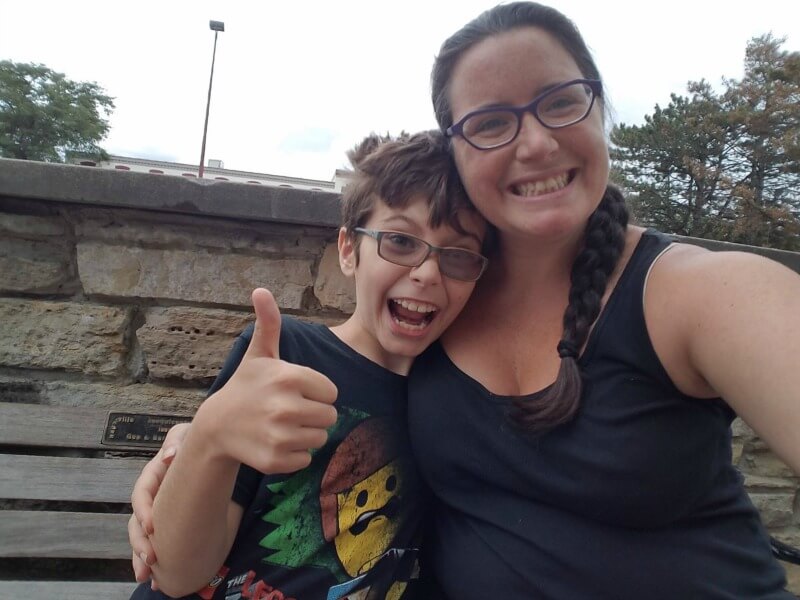 Sense of Accomplishment | Yeah, sure it is really exciting when your kid gets a rare Pokemon he’s been hunting for ages, but that is not the sense of accomplishment I am talking of here. As I’ve mentioned before, my son struggles socially. This means in school he was seen as the “bad kid”. At church, we are the number that gets called to pick up our kid early. Grandparents don’t want to watch all the kids because they don’t know how “he will act”. The list goes on. It is hard for him to feel good about himself when others have a hard time seeing him shine.

Not now. Now, on a daily basis, he is hearing “Way to go.” “That’s Awesome.” “You rock, kid.” He is hearing complete strangers compliment him. He is having family members ask to chat with him about his new favorite game. He is proud. This might be the one thing that brings tears to my eyes each and every time it happens. 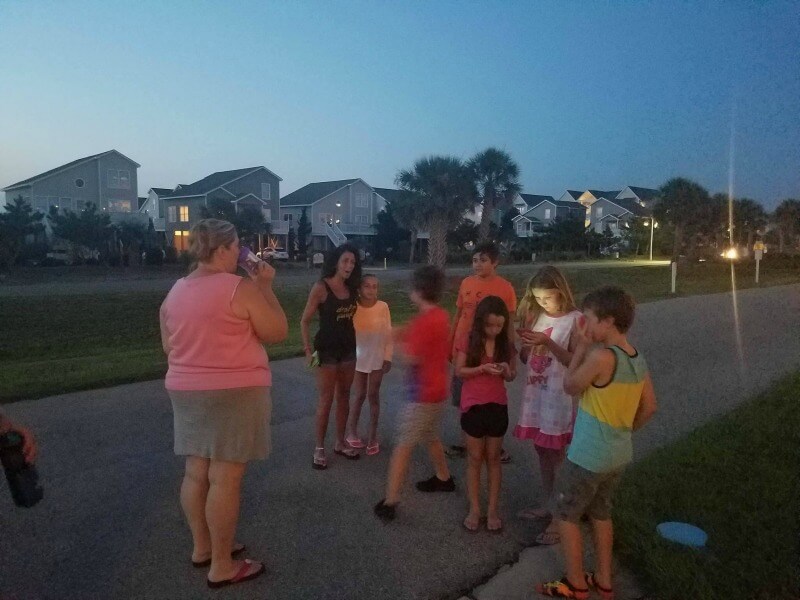 Acceptance and Inclusion | Thanks to Pokemon Go, my son (and tons of other children with special needs) have found a place where they feel included. They suddenly have a common language, a way to approach other children, a point of interest that is shared across the board. Now when we go to the park, my son doesn’t sit by himself and throw sand. Now, he looks for another child playing Pokemon Go and immediately has a friend for the day. He has never, in eleven years, been able to go to a park and be so easily accepted by others. His anxiety seems to melt away and his excitement is contained in a way that makes him feel completely included.

I could really go on and on about the benefits of Pokemon Go for so many people. I have seen wonderful things happening because of this strange app. In fact, when I hear people mock the app or make fun of it, I stop in my tracks and share just how this app is changing our lives. It is something I am pretty passionate about. I can’t wait to hear how this app has touched your life or the life of your child with special needs!

More Adventures In Connecting with Kids 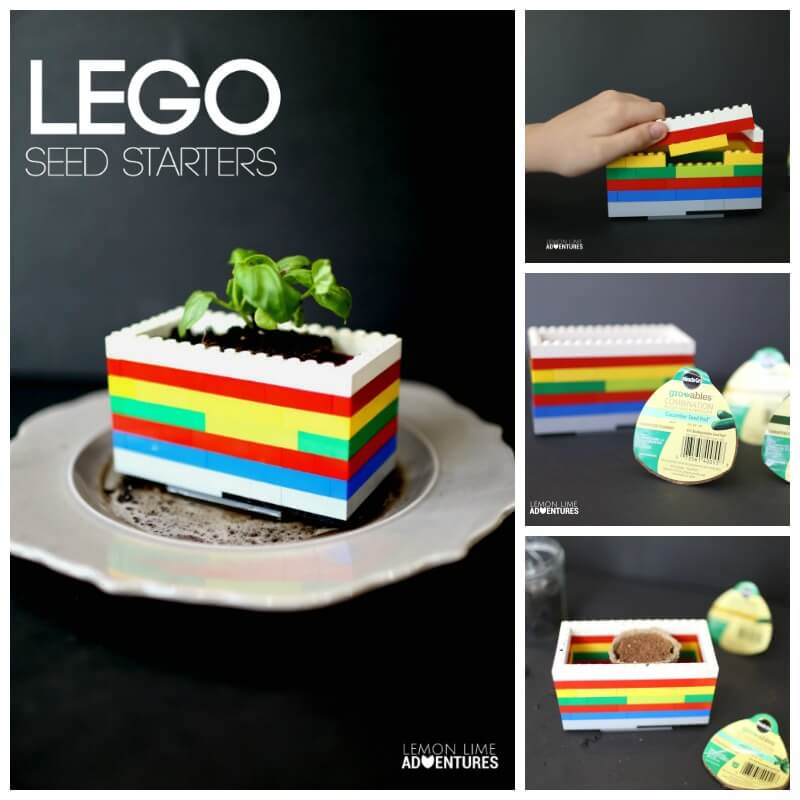